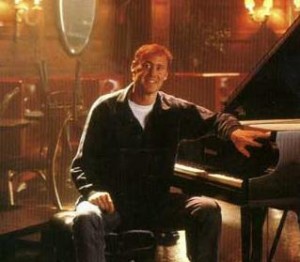 The Way He Is

Somehow I was recently reminded of this post, in which we speculated which band most reduced rock ‘n roll to its cliched essence. Then, somehow, Bruce Hornsby and his eternal tuft of hair entered my thoughts. I’ve been chuckling over the thought of Bruce Hornsby ever since. How does a man maintain so little hair for so long—without variation? How does he get his hairline to recede so far without actually being bald? He practically has a natural mohawk. He never experiments with the length of his hair. He never grows sideburns. Even when he played with the Grateful Dead he kept on being Everyman Bruce Hornsby. And what happened to the promise of Hornsby the Gothic Americana Songwriter? Remember the buzz over his debut album and comparisons to The Band? I never got it. I never got Hornsby, although I must say, he seems like a good egg and a real musician’s musician in all the best ways of that term.

Now that I’ve slammed the poor guy (and feel free to slam me back appropriately), let me tie it back to the old thread about bands that reduced rock ‘n roll to its cliched essence. Way back then we focused on bands. How about we determine about the most cliched singer-songwriter in rock ‘n roll, that is, the singer-songwriter who hits all the marks critics expect to see hit while failing to actually make any lasting personal statement, the way an archetype of the genre, like Bob Dylan did with regularity? It can’t just be a “bad” singer-songwriter, like Jewel. It has to be someone who has experienced critical acclaim while maintaining a long career, someone like Bruce Hornsby.