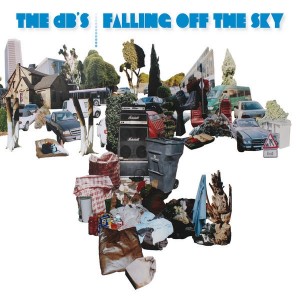 The first new album by the classic dB’s lineup, Fall Off the Sky, has been available for the last few week for streaming audio at Rolling Stone among other outlets. I keep putting off listening to it, even though I have a deep love for the band’s first 2 albums and everything they seemed to stand for, even though I always hope that they will miraculously recapture what they—and I—once had. Care to listen along with me? I will listen, and I will report my initial impressions. Feel free to do likewise, or if you’re like Townsman Oats and have somehow possessed a copy months before Chris Stamey completed his file naming and filing of mix stems, add your comments as you feel fit.

Since Stamey first left the band, Gene Holder shifted from bass to guitar, and all the wrong people started getting into the band just as their albums were going downhill, I’ve been nothing but disappointed with most releases I’ve heard by anything approaching The dB’s (ie, anything going by that name or anything involving both Stamey and Peter Holsapple). I like some of Stamey’s early solo albums and the one Holsapple solo album I’m aware of, but I share Mr. Moderator‘s dread of the Stamey-Holsapple duo album Mavericks and its use of the 128-string guitar. Will a newly reconstituted dB’s, with all its pieces in their rightful place, allow these guys to pick up even remotely where they left off after Repercussions? We shall see…or hear, in this case. My thoughts follow.

“That Time Is Gone”: I like hearing the ’60s guitar and organ riffage. This sounds like what I could imagine Peter Holsapple doing these days if he’d let himself rock out a little. Hey, what am I saying? He is rocking out a little. Totally fine, with the cool, down-t0-earth touches I loved the band for when they started, like when the organ goes up an octave on the last chorus. My friends and I learned a lot from that stuff.

“Before We Were Born”: Stamey gets off to a good start, too, with a perfectly lightly heavy power pop arrangement. So far, so good. Can it be, a dB’s album that allows itself to be heard, that gets its collective head out of its ass? This has its charms, like that last Posies album, or at least what was supposed to be the last one, when they stopped trying to be pop stars and just cranked out whatever they were capable of doing.

“The Wonder of Love”: I want to dislike this song, but I’m having trouble doing so. It’s like the Spin Doctors if they didn’t suck. The organ helps a lot. They stopped using organ after the first 2 albums, didn’t they? I love what a poppy ’60s organ can do for a song. The horns are actually kind of cool too. This is reminding me of the outdated Turtles-style touches the band used to deliver in spades, before they got all Americana on my ass.

“Write Back”: Totally wimpy Stamey Will Rigby song but with just enough style to overcome the struggling tone his older voice has handling the song’s key. Again, the organ picks up the song at the middle eight, and drummer Rigby is right on with his fills. There’s much wrong with this performance, but it’s the sound of the guys I grew up loving. I can handle it; it’s like seeing me and my friends age.

“Far Away and Long Ago”: The orchestral opening and song title bode badly. This is like one of those “Broadway musical” numbers Andy Partridge started writing in the latter stages of XTC. It’s “good” on a few objective levels, but I’d rather hear a song like this played in some weird way rather than through the controlled, “classic” approach Stamey takes with the arrangement. Done this way it just sounds like a bad version of the kind of Paul McCartney song I end up begrudgingly admiring. I’ve got a lot of love invested in the dB’s thanks to their first 2 records, but they were never on the level of Paul McCartney.

“Send Me Something Real”: This song also has the humble charm of the last Posies album or one of the good songs on the last couple of XTC albums. It’s hard to make “boyish” music in one’s 50s, but this song, like most of what I’ve heard so far, is a respectable effort. They sound like they are “hearkening back to their youthful nature” more than acting like kids. I can dig that. They don’t sound like those old power pop musicians wearing Beatles wigs or, maybe worse yet, those dying their remaining real hair black and still wearing bangs.

“The Adventures of Albaross and Doggerel”: Look at that title. This song’s got one foot in the grave before it even starts up… Hey, Gene Holder’s getting to play above the rim in a mildly psychedelic song. Can they keep it up? Is that electric handclaps in the breakdown? Distracting. This is pretty cool in concept, but no one’s throwing down the monster jam that would lift it past Stamey’s pop-science lab technician instincts. Wait: an actual guitar solo. It’s not bad, but the song keeps coming back to the kitchy of Shocking Blue’s “Venus,” which isn’t the worst thing and which is, admittedly, just the type of limitation that always endeared The dB’s to me.

“I Didn’t Mean to Say That”: Ugh, this is starting out with that Americana vibe. I was always a Holsapple guy, and I’m finding something to like in his singing even as the song moves on and continues to bum me out. Is Jesse Colin Young still around? This sounds like something he could tackle, not that there’s anything wrong with that.

“Collide-oOo-Scope”: Have modern-day Chris Stamey and Andy Partridge ever been seen in the same room at once? This is so much like the kind of late-period XTC song the nice guy in me wanted to like but the dick in me couldn’t get past. The dick in me wins out. Choruses centered around the lyrics “Was it only a dream” should be outlawed. A lot of other things should be outlawed in this song, such as the lyrics to the entire McCartney-style middle eight in waltz time. Ugh.

“She Won’t Drive in the Rain Anymore”: The tender Americana intro is exactly the kind of thing the first two dB’s albums promised to spare me from having to hear in the early ’80s, after a decade of stuff like the Eagles and much worse (eg, Michael Murphy’s “Wildfire”). I know they’re from the south, but I liked it better when they sounded like a faux-British American ’60s pop band. What’s with Southern pop musicians having to play songs like this? From REM to Bruce Hornsby to Hootie and the Blowfish not one of these songs comes close to the Glenn Campbell hits written by Jimmy Webb in the ’60s, the only justifiable influence I can imagine on this style of songwriting.

“Remember (Falling Off the Sky)”: This starts off like one of those “holding hands in the rain”-style love songs the Moderator can’t stand, what he calls Love Songs to Women the Singer Never Even Talked To, or something like that. I’m with him on this stuff. The guitar stuff that kicks in helps a lot, but then the vocals come back in and drive a pointless song further into the ground. Thankfully it’s short.

So, I lost my interest as this album moved past the midway point, but my gut feeling is, “At least it didn’t stink.” I still love The dB’s for what they gave me so many years ago. Thank you.

11 Responses to “Insta-Review The dB’s, Fall Off the Sky”