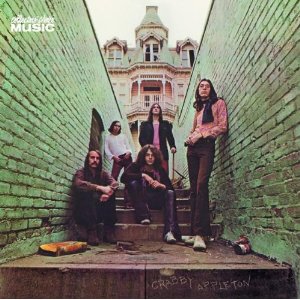 Of course, it was Crabby Appleton!

Why of course, it was Crabby Appleton and their 1970 single, “Go Back,” from their debut album! I stumbled across this album on eMusic the other day and started cracking up at the memory of a college friend and I cutting up on this band almost weekly on our graveyard-shift radio show. I don’t know why we found this band so humorous. This song and a couple others I downloaded from the album are awkward in their decade-straddling, oddly Latin percussion–heavy, power pop arrangements, but the album’s not too shabby. Looking back, maybe my friend and I felt more comfortable spinning more pure pop–focused Badfinger deep cutz, but these days I’m more interested in hearing the ambitiously flawed stylings of a Crabby Appleton, giggle-inducing band name and all.

Crabby Appleton, “To All My Friends”

[audio:https://www.rocktownhall.com/blogs/wp-content/uploads/2010/11/Crabby-Appleton_05_To-All-My-Friends1.mp3|titles=Crabby Appleton, “To All My Friends”]

Congratulations to Townspeople BigSteve, misterioso, and ladymisskirroyale (with an assist by Mr. Royale and possibly some contraband research materials) for playing the mockcarr option and keeping their smartypants on through the length of the initial post! BigSteve actually saw this band in concert and pooh-poohed them when they opened for some hippie band he and his friends went to see.

As for the band’s pedigree, you’ll appreciate that most of the members came from a band named Stonehenge. What really caught my eye, though, was that the band’s lead singer, guitarist, and songwriter, the guy who made Crabby Appleton all that it could be, was Mike Fennelly, previously of my favorite “sunshine pop” studio concoction, The Millenium. (See end of this post for a treat from that band.)

Here they are again, complete with historical credibility–building timecode, on American Bandstand, a decidedly non-Dutch popular television show. I wish we had a color clip to better appreciate the bassist’s pants!

13 Responses to “Mystery Date Revealed: Who Was That Decade-Straddling, Shoulda-Been Dutch Band?”