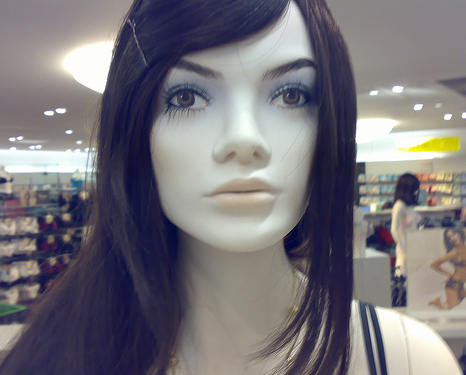 At her own space, Townswoman Citizen Mom delivers the goods on the recent Madison Square Garden concert by White Stripes with Porter Wagoner opening. Read all about it here, but first chew on the following excerpt, rock nerd hatas:

The prevailing wisdom on Meg White seems to be that she’s there only to be a foil for Jack, with people sneeringly wondering whether he writes the drum parts for her (as if that matters, actually), as if she’s little more than a performing doll, the little plastic ballerina who twirls only when you open the lid of the jewel box. Bullshit. This woman is far more sure of herself than her doe-eyed persona suggests, with far more skill as performer than her detractors allow. The importance of her presence to the expression of Jack’s furious genius is infinitely greater than any of us probably suspect.

Hey, hey, hey, look what’s dropped at Phawker.com, a live, streaming preview of the new White Stripes album, Icky Thump. So why not reclaim my title of King of Minute-by-Minute Reviews from Mr. Moderator, who recently used my throne to kiss Paul McCartney’s sagging butt? Nice job, Mod, but this is my turf!

Icky Thump opens with “Icky Thump”, on which Jack and Meg do their patented Led Zeppelin via T-Rex stomping simplicity routine to perfection. There’s something slightly dark and mystical about the overdubbed solos, like the band is promising to enter its Presence phase, but White sings with too much glee and places his voice too far up front to worry us about leading us down that album’s black hole. Beside, White Stripes don’t have a multi-talented bassist to take the wheel during their captain’s junkie slip.

“You Don’t Know What Love Is (You Just Do What You’re Told)” has a real 1973 AM cock-rock hit feel, like something a heavily mustachioed 1-hit wonder might have struck gold with when I was first noting the interesting differences between boys and girls. So joyous and friendly, like that song “Signs” or that song about making the cover of Rolling Stone. Get me a K-Tel release featuring this one! Digging it, and digging yet another cool-sounding guitar solo. Fuck all you slow-moving, mandolin-playing bands out there! This is why rock bands entered the studio. The rest of you should set up a stereo mic in an abandoned church.

“300 MPH Torrential Outpour Blues” is a relatively tender change of pace, but even this song packs a snaky rock punch. Oh man, listen to that tiny, volcanic guitar solo! I don’t know what’s going on, but I want to listen to it again. Load up another hit, brother. Is this White guy about the last guy on earth who knows what to do with The Power and Glory of Rock? He’s so ON, so far, that I’m finding the elephant in the Hall – Meg’s drumming, or lack thereof – to be no issue whatsoever.

What’s this song, “Conquest”? Who asked for this mariachi band nonsense on Track 4 of what had been headed for the best album I’ve heard in ages? Save this crap for a Tarrantino soundtrack!

OK, what’s next? I like the opening chords of “Bone Broke”! Meg sounds like she’s going to play a full beat before this song’s over, or is that a drum machine playing the same timed tom fill that threatens to sound like it was played by a real drummer? Oh hell, this is all beside the point. This song’s starting to get underway. I’m liking this sinister verse, but something’s missing. Maybe this is a rough mix that was leaked to the public? Oh that’s right, these guys still can’t pony up for a friggin’ bassist. I’ll try to be a bigger man and overlook this fact. I know it’s part of their schtick, like the color-coordinated outfits. Less is more, right? God forbid a mustachioed bassist would slide up to the upper registers of his Gibson Firebird bass.
END_OF_DOCUMENT_TOKEN_TO_BE_REPLACED