RTH: Brian Jones– or Mick Taylor-era Stones: do you have a preference?

LK: It’s very hard to compare the two. I’d say, the fact is, the Brian Jones era has a weird cross-space when Brian was in decline. It wasn’t like, Oh, here’s one, and here’s the next. Brian Jones’ star was so in decline, even though I love the Brian Jones era, “Lady Jane,” playing the sitar. I think that’s a fascinating era. And it would be foolish to deny Mick Taylor, in the Sticky Fingers era, is like a certain height of the Stones. The Stones have such a certain history; each era is important. I would be hard pressed to choose. I think Mick Taylor is quite an innovative guitarist who really gave them a strangely feminine edge at a time when they were at their most macho. In fact, with Brian there’s probably not a whole lot of a difference in their personalities within the band. On Exile, Mick Taylor’s playing mostly slide and adding that wavy, feminine quality to the harder chops of Keith. I see both of those eras…you can’t have one without the other.

RTH: What is the definitive version of “Gloria”—and you don’t need to be humble?

LK: For me, The Shadows of Knight. I mean, I love our version, and we took it to a place that I think Van Morrison never imagined, that we never imagined. But when I personally do “Gloria,” and I’ve been doing it a little bit longer than Patti and I still do it because it’s a great party version. I do it at weddings; I did a particularly great version at our bass player Tony Shanahan’s wedding, where I was able to substitute the word Gloria with his wife’s name, Gabrielle. Then there’s that long middle section, where you can expound on just about any situation. I did that most recently at Johnny Thunders‘ birthday bash. It’s the song I consider the National Anthem of Garage Rock, and of course everybody will dance. The version I play is The Shadows of Knight’s version; that’s the one I sang in 1967 at the Middlesex County Fair to that girl in the back row that I always saw on the school bus who never gave me the time of day, and now I could see her looking at me. You know, it was a great moment in time for me, and it’s a great number to play with Patti. It’s one of the great anthems of our time. 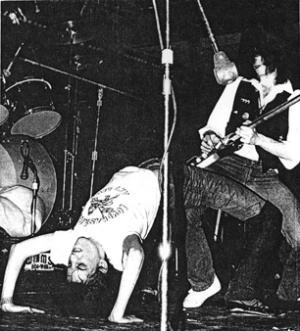 RTH: You’ve backed, along with Patti, Jim Carroll and Alan Ginsburg, band leaders who were initially poets. Do you ever imagine a pre-rock era poet who’d have been fun to back?

LK: Oh, that’s interesting, that’s a good question. I’d like to provide a soundscape for Hart Crane. That’s a really interesting one. The irony is that I’m not as up on poetry as I might be. I appreciate a good poet. One of the things about playing with poets, as I have—and also with John Giorno—and I have a literary bent myself, so I understand that when you write a great paragraph or a great sonnet there’s a melody and rhythm within it. When first played with Patti at our first readings, in ’71, what I did was extract from the way she focused her poem: the melody, the rhythm, and the breathing of it. It’s great to be able to lace the music behind it. When you get performers moving into song, that’s a gray area, which is actually most rewarding. Between lyric and poetry is music. There’s a broad area of interpretation. It’s helpful if the performer has a sense of performance. I mean, Patti was not just a poet, Jim Carroll was not just a poet; they were performers. Jim, if you had the privilege of seeing him, was an incredible performer. Alan Ginsburg, as well. These are not just poets who are on the printed page. They know how the words come out of their mouths, the impact of their words, and how to sing them to an audience. As an instrumentalist behind them, it’s a great way to place a frame around them.

RTH: My final question is, and I know this is like asking a parent to choose a favorite kid: Do you have a favorite song from the original Nuggets compilation?

LK: Oh, it’s so difficult. I mean, you know, I have to say as a performer I’ve tried on a lot of the songs from Nuggets…”Pushin’ Too Hard” is really the one that says it all for me. It’s got those two chords…It’s got a guitar break… It’s a joy to play. I’d have to say that’s probably my favorite. I’ve tried to do “Night Time.” You know, they’re all great songs, I had the pick of the litter, as they say. But I’d have to say that “Pushin’ Too Hard” exemplifies, in its most basic form, what Nuggets is about, which is to get up on stage and to turn the amplifier up and yell that lyric. That you can get blown away by the power that is in your hands and transform your behavior, you know, if you’re like myself and, you know, didn’t fit into a lot of accepted norms… It was a great revelation the minute I formed my first chord and sang my first song and took energy from these great songs that were there to teach me how to do it.

RTH: Yeah, I love that song and how it sounds like you’ve entered it in midstream and it feels like it’s going to go on all night.

LK: And they did the same song for 4 albums straight! Sounds great to me. It’s like, “OK, we’ve got it guys! ‘Mr. Farmer’/’Up in Her Room’…” And I have to say, I’ve got a certain affection for some of the odd ducks on that record, like “Romeo & Juliet,” by Michael and the Messengers. It’s a complete indulgence, you know, there’s nothing really totally great about that song, but I remember the moment that I drove to Chicago and heard it on the radio, and I went into a record store and bought it. It seemed to represent to me being on the road and that particular time in my life. I have a certain affection for The Magic Mushrooms—”Moulty” and The Magic Mushrooms. “Moulty” is really crazy, probably “Are You a Boy or Are You a Girl” would have been a better, expected conclusion, but “Moulty” is so out in the trees.