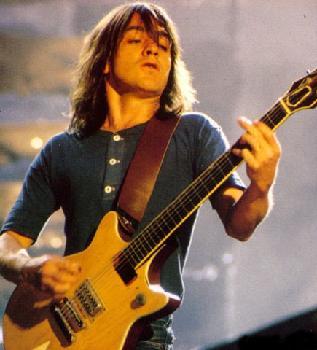 He doesn’t want to make it cry or sing.

Townsman hrrundivbakshi may want to take a seat before reading this. If there’s a fourth member of his Holy Trinity of Rock (ie, ELO, Prince, and ZZ Top), it may be AC/DC. Here goes…

Reports are flying around that the band is going to call it quits in the wake of rhythm guitarist Malcolm Young‘s recent stroke. This is sad news, obviously. Although I’ve never been a big fan of AC/DC, years of prodding by my close personal friend Townsman Sethro, finally turned me onto the genius of their economical hard rock production power. The band has good hooks to boot, that I came around to enjoying as long as I could block out either of their meathead singers. Watching their videos over the last 15 years of my semi-enlightenment regarding the band’s merits, I was always struck by the dedication and focus of Malcolm Young on rhythm guitar. He seemed to define all that is right in a dedicated rhythm guitarist. He’s the rhythm brother that John Fogerty probably wished Tom would have been, or Mark Knopfler’s would-be rhythm brother, the one who “doesn’t want to make it cry or sing.” The guy was a rhythm machine, with seemingly no need to hog the spotlight. He just kept his head bobbing, his forearms pumping, and the band chugging ahead.

I’ve never known much about how AC/DC operated. I found this passage in the story linked above especially meaningful:

While Angus Young is the more famous, and more recognisable, AC/DC is most definitely Malcolm Young’s band, he started AC/DC, under the guidance of big brother George Young (ex-Easybeats, and co-producer) and encouraged his younger brother Angus to join him, and take on the world.

Malcolm Young has been the quiet motivator and boss of the band for four decades, co-writing nearly all of AC/DC’s classics, and making sure nothing happened to harm or damage the band’s reputation, or disappoint the fans who’ve stuck by them for decades.

His passion for the band and its music, and integrity, were so intense, back in the 1970s he used to have fistfights with his younger brother, Angus, in the studio, when disagreements about a sound or riff couldn’t be resolved. Proper punch-ups, teeth were lost, blood was drawn.

Anyhow, here’s hoping to as good a recovery possible for Malcolm Young and the band staying true to who they are and hanging it up, if that’s what they feel is right.