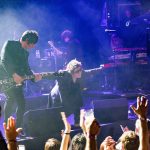 WB was the kind of friend who could get you into awkward and troublesome situations, but if things didn’t go wrong, then we had a whole lot of fun (bonus: he was shameless about talking to girls while I played the part of the quiet sidekick). There we were at the Spectrum, waiting for the Psychedelic Furs to take the stage. Pretty In Pink was a big hit, the joint was packed. WB turned to me and said, “When the Furs come on, we have to go up front!” I looked around from our seats in the 12th row and said, “We ARE up front! We can see, we can hear, we have room around us, this is great – we’re good here.” “No,” he said, “we have to go ALL the way up front!” He was resolute, no point in further discussion. Not wanting to get ditched, I reluctantly agreed. Much of our dynamic was this way.

We pushed our way into the crowd at the edge of the stage, no doubt ticking off a few kids whose (correct) perception was that there was no room for any more people. I found myself jammed up against a metal fence, crushed and uncomfortable. My left arm was pinned. I worried that if the crowd started moving, I wouldn’t be able to protect myself or keep my balance. I figured I could wriggle my arm up and rest it atop the fence, but once I got my arm free, I realized the fence was higher than my shoulder and unless I got a foot taller, broke my arm, or came down with a case of Rickets, there was no way my plan would work. I had two choices – put my arm back down where it was immobile, or hold my arm up in the air like an idiot. I chose the latter.

So there I am, standing there with my arm aloft like a New Wave Statue of Liberty, the lights go down, the crowd cheers, the band comes out and launches into the first song. Eight bars go by and a spotlight reveals lead singer, Richard Butler, sauntering onto the stage with that laconic confidence that screams, “love me” to his loyal followers. As he walks downstage, he makes a beeline – to me! He struts over, grabs my hand and gives a vigorous shake! Richard Butler shook my hand, HOW COOL IS THAT?!

I felt energized by the handshake from a rock star and it tamped down how silly I felt about standing there with my arm in the air. A few songs later, Butler made his way towards me – and shook my hand AGAIN! Well, that was also cool. A few songs later, he did it again but the excitement was turning sour. When he shook my hand for the 5th time, I began to feel tormented. “Hey Richard,” I wanted to say, “stop shaking my hand! You don’t understand – I can’t put my arm down! Please make it stooooooooop!”

Of course, after a while the crowd had spaced out a little and I was able to lower my arm. It was then that I realized why WB wanted to get close- he’d brought a water pistol to the show and was getting a kick out of trying to squirt the band members. Yes, that is a weird thing to do.

What about you – have you had brushes with greatness at a big rock show? I’m not talking about singing Freebird at your local with your friend’s band. I mean, did you get a handshake? Did the singer hold the mic out to you to sing the chorus of the song? Did you get pulled onto stage to dance? Did the lead guitarist jump into the crowd and play a solo right in front of you? Maybe you got the jackpot – going backstage after the show? Hopefully your experience was less of a torment than mine!

12 Responses to “Brushes with Greatness”