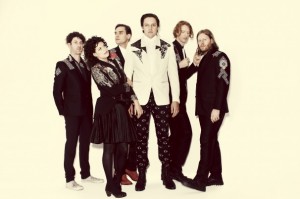 Listen, I’m in an incredibly bad mood today (it has nothing to do with you), but don’t think I’m not man enough to welcome an intelligent discussion on a piece of rock criticism that appeared in The Washington Post.

On a friend’s Facebook page people are sharing mixed opinions on critic Chris Richards‘ handling of his negative review of The Arcade Fire‘s new album, Reflektor. It’s not Richards’ opinion they seem to be reacting to but his tone. I don’t get it. What’s wrong with a critic thinking an album sucks and writing about it as he or she feels? Why do I sense some candy-ass regard for the critic’s tone? It’s a stinking rock ‘n roll album and one person’s opinion of it. It’s not a dissenting opinion on a Supreme Court decision.

After winning a Grammy for album of the year in 2011, they’re still the biggest rock band on the block, still making music mysteriously devoid of wit, subtlety and danger. And now, they’re really into bongo drums, too. We should all be repulsed. Only partially because of the bongos.

Candy-asses of the Rock World: Please explain what’s wrong with this negative review of The Arcade Fire’s new album, Reflektor.

People on my friend’s Facebook page are lashing out at this guy for being “tragically hip,” for feeling slighted by the “cool kids.” In my formative rock years, these admittedly pathetic feelings were a badge of honor, a rite of passage. What rock snob worth his or her salt didn’t feel left out by the cool kids? Is it no longer cool to feel left out? Is everybody happy nowadays? Everybody but me and Chris Richards?

Just last week I was asking my 16-year-old son if there’s anything kids can be made fun of these days. We were joking around, but there was an undercurrent of snobbish pride in our joking. In a world where young people can walk around in “slides” (ie, those sporty flip-flops) and white knee-high socks without shame, how can anyone know their place, from bullies to misfits?

Listen, anyone past a certain age should grow up and grow past whatever feelings might have fueled their essential take on rock ‘n roll, but if in our judgments of rock ‘n roll music we totally deny that kid, be it a kid who sat at the cool table or one who was excluded, I’m not sure we’re fit to listen to rock ‘n roll any longer. Or maybe we’re not fit to critique it any longer. Rock ‘n roll is there for the taking, enjoying, hating, whatever. It’s not something we are obliged to approach and assess through some formal, respectful, educated, mature eye. That is one approach that can be taken, but why should it be the only approach?

30 Responses to “Candy-asses of the Rock World: Please Explain What’s Wrong With This Negative Review of The Arcade Fire’s New Album, Reflektor”