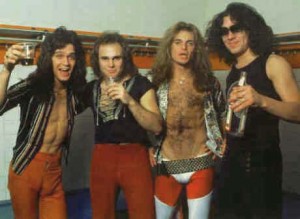 Go All the Way

A band that’s been wildly popular through 3 lead singers, a record-setting run of bad taste, and dozens of hissy fits is usually not thought of as being in need of a world famous Rock Town Hall Critical Upgrade, but while watching the movie Argo this weekend and hearing “Dance the Night Away” crank up during a scene it occurred to me that I might have been more receptive to Van Halen in their time, if not even liked them a little better, if they had been marketed as a power pop band rather than some kind of badass hard rock act featuring a lead guitarist who was taking the next giant steps after Hendrix.

They were marketed as some kind of badass hard rock act featuring a lead guitarist who was taking the next giant steps after Hendrix, right?

Maybe I missed the point. Maybe they were supposed to be taken as some sexually charged version of The Raspberries. Pull down Eric Carmen’s bellbottoms and you’d be looking at the smooth, plastic crotch of a Ken doll. You know David Lee Roth, on the other hand, was packing heat inside his Spandex tights. I don’t think he needed plugs down there.

Is that what the little girls have understood all along? Should I have been grading Van Halen as a power pop band more than a hard rock act? Thought of in those terms were they actually kind of great?

As I get stuck on the intro to “Dance the Night Away” I am, probably fortunately, not having much luck recalling how their other songs go except for a few key bits, like the talking blues intro to on song and the chorus of “Panama,” at least the opening line of the chorus, when they sing the song’s title. Come to think of it I just heard “Jump” about a week ago and realized how decent a power pop song that was.