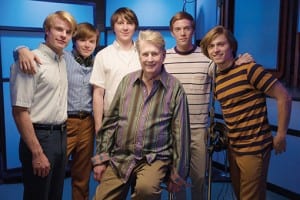 There was much to take in during a recent screening of the Brian Wilson biopic Love & Mercy, which Townsman E. Pluribus Gergely and I took in over the weekend. My overall critique appeared yesterday and is still open to discussion, but I plan on spending the rest of this week examining some of the finer points of the film. Today I’d like to discuss the troubling casting of a young Dennis Leary as Dennis Wilson as well as the broader issues I had with other casting decisions in regard to the ’60s-era Beach Boys.

I’ve grown to like Dennis Leary over the years, although I found his entire act entirely contrived when he burst on the scene with his MTV faux-chain-smoking rants. (He never looked like he inhaled, did he? Bogus!) Anyhow, Leary grew on me a bit when he followed up his failed fallen cop show with that fallen fireman show, Rescue Me. For the first time he struck me as actually passionate about something: himself playing this character. The show and Leary’s commitment too it were absurdly sincere. Although I rarely appreciated the show at anywhere but chuckling arm’s length, the peak into Leary’s humble freak aspirations helped me appreciate him and his act. It was an impressive run.

Even more impressive is how Leary transformed himself into a young man for his role in Love & Mercy. The problem, however, is twofold:

13 Responses to “Dennis Leary as Dennis Wilson in Love & Mercy”