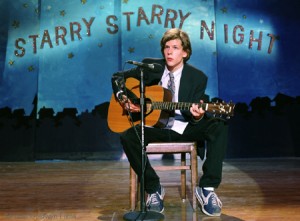 No, this is not a reference to sammymaudlin’s recent post in today’s All-Star Jam.

This post is about remembering something good. About the transcendence of music, even crappy music.

Last night, I attended and performed in this year’s Talent Show at the middle school where I work. Yes, we adult faculty were magnificent in our rendition of the Harlem Shake (I’m sure my Funky Chicken will be commented on for years to come). But the part of the afternoon that stood out for me was a student’s rendition of Kansas’s “Dust In The Wind.” I initially guffawed when I saw the song announced on the program. When when she started to play, it realized it was a lovely choice. I am not admitting that this song has some sentimental value as I’d seen Kansas in concert about 3 times when I was growing up. I will admit that it’s a horrible song. But to hear this student sing it in a heart-felt way was oddly transcendent.

It reminds me of that album, The Langley Schools Music Project, and the student renditions of some popular songs at the time. Many of those songs are objectively horrible (“Mandy,” by Barry Manilow!) but when performed by young students (even horribly), they somehow lose some of that dreadfullness and become…palatable? Beautiful? Acceptable? (There is a cringe-worthy but great version of “Good Vibrations” that has been used in some movie soundtracks.) One of my favorites from that album is “Desperado” by [The] Eagles:

I’ve often been cautious about attending student/young performer musical events: they seem to be more the stuff of family photo ops than “art.” I can still recall the dread, waiting for my turn to play in annual piano recitals, sitting next to my father and hearing him rapidly suck air in through his teeth when someone played a wrong note, and then worrying that I would make some laughable mistake.

So yesterday’s performance was just what I needed: the kids who love music and it how it shows, even if what they choose to play is garbage.