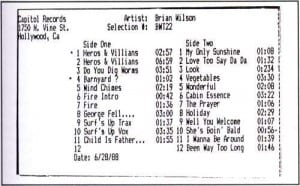 It seemed 1 out of every 4 Beach Boys-loving friends would shell out $30 for a Smile boot and call their other 3 friends over for a listening session. I finally heard my first Smile outtakes in the mid-’80s. Honestly, no amount of bong hits could convince me that what was in the works was any better than the extremely mild pleasures to be gained from any song from the consolation prize album Smiley Smile, excluding the majestic single “Good Vibrations,” one of the greatest musical achievements ever committed to tape. A few years later I befriended my close personal friend Gergs. I was straight as an arrow by that point in my life, and we agreed the unfinished works were no better sober than they were stoned.

What was strange, to us, was that while all the newcomers to Camp Beach Boys, kids who seemed to get into the band after identifying with Brian’s psychoses and aspirations, were eating up the Smile boots while dismissing most of the band’s Endless Summer hits as readily as most “cool” kids did when we were growing up. The Beach Boys, for this new crop of fans, were Brian’s Band, for Mike Love and the rest of the squares to fuck up. In Love & Mercy, the Mike Love character even complains about the perception that the band was becoming Brian’s Band, straying from its origins. The Mike Love character had a point.

21 Responses to “Love & Mercy: The Cave in the Forbidden Zone”