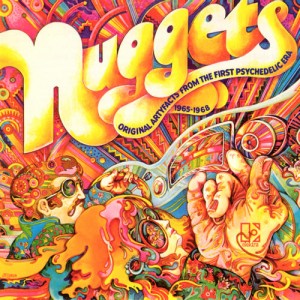 In the comments to an old post on the collective horrible hairdos of The Outsiders, a possible Once and For All… topic was proposed by Townsman alexmagic that I forgot to pose. Yesterday, as I revisited that old comment, I was reminded of how good an idea the Magic Man had. Let’s determine the best song on Nuggets…once and for all! However, the snob in me will restrict this discussion to only the original vinyl release of the legendary Jac Holzman–Lenny Kaye–compiled garage-rock compilation. This is not to knock the Nuggets box set, but the offshoots of Nuggets box sets (ie, UK edition, ’80s neo-garage rock edition, ECM edition) that have followed in its wake have increasingly annoyed me, making it too easy for people to pick up stuff it used to take my generation hard work to acquire. For that reason, the Nuggets box set and any entries from that full track list must be punished.

In the spirit of the original vinyl sequencing, it’s only right that we reach an irrefutable decision through divisional play. Each album side’s worth of songs constitutes one of 4 divisions. First we must determine the best song on each album side, then play the winners off against each other: Side 1 vs Side 4 and Side 3 vs Side 3. The winners of those matches, of course, play each other to determine—once and for all—the Best Track.

There will be no wildcards in this divisional playoff system. That would get us into box set stuff, and the Continental European Nuggets box set has spoiled anything to do with notions of a wildcard entrant for me.

64 Responses to “Once and for All: Rock Town Hall Announces Playoff System to Determine Best Song on the Original Nuggets Compilation”