Mick Green reformed the Pirates in 1976 with Johnny Spence on bass and vocals and Frank Farley on drums, and they rode the pub rock bandwagon to great success. Here they are in their prime playing one of their signature songs, “Gibson Martin Fender.” Note the rad Pirate outfits:
nG4TXUkGL9Y]

And here’s Green just a couple of years before he died casually tearing it up for a Finnish festival audience and looking like he’s having a blast. R.I.P.
KNiLM1ccvVM]

Green was famous for his choppy Telecaster sound, playing rhythm and lead simultaneously. I know you’re thinking where have I heard that before?
GPRP0gdS95A]

Dr. Feelgood actually formed before the Pirates re-emerged, and Wilko Johnson played without a pick, but his rhythm/lead Tele style seems to come right out of Mick Green’s. There’s not all that much video available of the original band, so check this out:
rViBFgjChH0]

The jerky body English and stripped down sound was a precursor of punk, but when Dr. Feelgood hit London in 1975 they took the pub rock scene by storm. Their album Down By the Jetty(1974) and Malpractice (1975) aren’t highly recommendable, because they don’t really capture the band’s energy. In a recent MOJO feature Nick Lowe commented:

When the pub rock scene started going downhill, largely due to Dr Feelgood, who were so great they spawned many duff copyists, it was time to move on.

Wilko moved on in 1977, turning up briefly in the late version of Ian Dury’s Blockheads after Chaz Jankel split. He still performs with his own band.

One of the inheritors of this tradition, and a band who brought it into the punk rock scene, was Eddie & the Hot Rods. They were originally another Dr. Feelgood-style R&B pub rock band, but see how they combine that with some NY Dolls glam and incipient skinny tie/power pop:
U-w462fG5dg]

When their Teenage Depression album came out, Americans took it as punk rock with no idea of the band’s pub rock lineage, but it’s more obvious in this clip:
MrtwmyVMfOM]

There’s more echo and reverb than the Pirates or the Feelgood’s would have ever used, so I guess they added something to that sound. This album cover was certainly designed to appeal to punk rockers: 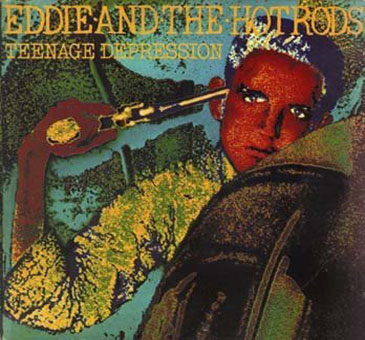 They were bandwagon jumpers, but so was Joe Strummer. Punk rock obliterated pub rock, but I don’t know where British maximum R&B could be found today. Maybe it emigrated to American with bands like the Black Keys.