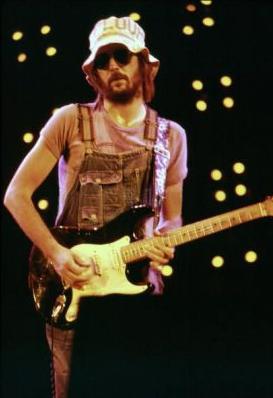 As far as my research has taken me, no rocker has looked convincingly cool while sporting overalls. As hard as Eric Clapton tries he still looks like a weary truck driver after an 18-hour shift. Perhaps it’s the smack and not the clothes. You’d think with all those buttons and clasps, the average guitarist would be afraid of scratching the back of his SG or Strat. But beyond damaging your equipment, one’s maturity is also taking a hit. This is a rock and roll stage not Romper Room. The video below featuring the long and forgotten brothers Tom and David Farmer (yes Farmer) of the band Blackfoot Sue are totally missing the esthetic of the glam rock sound they are aping. The visuals are jarring.

Of course, I have not discounted the ’80s. What with Dexy’s Midnight Runners and their Too-Rye-Ay-ing up and down a desolate street looking like they haven’t showered in days for the “Come On Eileen” video. I’ll give them a pass since it appears this was just a phase. Plus the music sort of matches the look.

So does that mean, the “overall Look” is acceptable only when a fiddle and banjo are within reach? 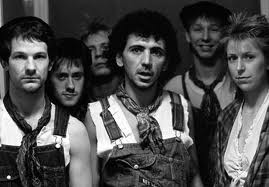