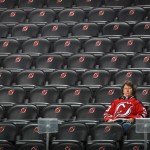 First of all; not that kind of contraction.

What I am talking about here is probably more familiar to fans of professional hockey than the general public.

I am not talking about, “The shortening and thickening of functioning muscle or muscle fiber” (thanks Dictionary.com).

I am talking about “the act of decreasing (something) in size or volume or quantity or scope” (thanks again, boys).

As in The New Jersey Devils, which are the unintended result of hockey failing both in Colorado and Kansas City in the 1970s.

The New Jersey Devil’s, for those not familiar, have won three Stanley Cups since contraction. Three.

Where the hell am I going with this? Glad you asked.

Wouldn’t rock and roll be better served with a little contraction? What if the forces that be determined there were just too many bands. What should be done? Do we really need all these alt-country bands? What if Neko Case sang lead for Wilco with that guy who used to be with Drive by Truckers backing her? Better?

What if all these touring Yacht Rock Revivalists formed just one band: The Dan-Dooby Loggins Band, featuring Michael McDonald. Wouldn’t you want to rock to those smooth jams?

16 Responses to “Rock and Roll Contraction”