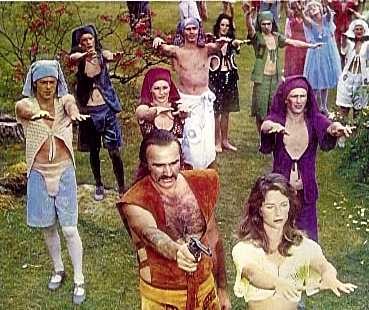 Maybe this has happened already in the history of rock, but if not, can Rock Town Hall collectively design the Zardoz of rock?

I know some of you find director John Boorman‘s 1974 sci-fi flick starring a ponytailed, Zappata-mustachioed Sean Connery running around in a silk diaper/mankini through a world full of identically built hippie handmaidens wearing loose-fitting halter tops “interesting,” but any time I see this film I’m stunned that a post-Bond Connery would appear in something this, uh, interesting. We’re talking the Ultimate James Bond here, so if we can’t find a major band or solo artist coming off their best-known series works to release a ridiculous, futuristic concept album, let’s create such a scenario.

I’m not the world’s greatest fan of The Who‘s Tommy, which can be seen as a pretty ridiculous concept, but there’s some great rock ‘n roll on that record. The post-Saturday Night Fever Bee Gees‘ doing the Sgt. Pepper‘s movie may come close to what I’m looking for, but that debacle was centered around the movie—and even at their commercial peak most of us wouldn’t have expected much more artistically out of the brothers Gibb. Nothing ever released by Styx qualifies. That band blows. I need a post-Bond—level Titan of Rock running around in a musical mankini.

I look forward to the beast we identify and/or create.

56 Responses to “Rock Town Hall Creates the Zardoz of Rock”