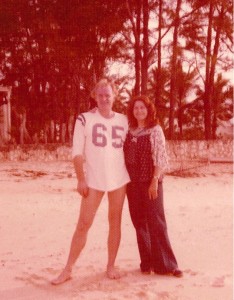 Morrison and "ladyfriend" on an undisclosed beach, circa 1988.

Rock Town Hall has received exclusive word that a correction is due to today’s news that outgoing Florida governor Charlie Crist has posthumously pardoned former Doors singer Jim Morrison. “Mr. Mod,” began a most unlikely voicemail received this morning, “can you see that media outlets drop the ‘posthumous’ part of stories about my pardon?” The caller, who identified himself as “Jimbo,” offered an exclusive interview with Rock Town Hall because, as he put it, “You guys deal shit, but you don’t take it.” The message ended with a promise of a return call at 12:55 pm EST. The caller chuckled knowingly.

What could I do but see that my calendar was clear at that time and see what developed? Following is a transcript of my call with “Jimbo,” who would not disclose his location but did convincingly cite all the inaccuracies in Oliver Stone‘s movie The Doors.

Rock Town Hall: Thanks for getting in touch with us. This is, to say the least, an intriguing story. For the record, you claim to be Jim Morrison of The Doors?

Jimbo: I’m Popeye the Sailor Man, all right. You can call me Jimbo.

RTH: OK… At the risk of this being some cheap snow job, let’s continue.

Jimbo: Are you a Gemini?

RTH: Yeah, how did you know?

Jimbo: I’m a Gemini. I can tell by the way you write. I dig your stuff, Mr. Mod.

RTH: I didn’t know you were a Gemini! That’s cool.

RTH: So what brings you to Rock Town Hall, and aren’t you supposed to be dead?

Jimbo: I’m finally off the hook for flashing my wang. It’s time to set the record straight, for starters.

RTH: Are you now admitting that you exposed yourself on stage?

Jimbo: No, man, I’m talking about the whole Jimbo’s dead. No, Jimbo’s hiding in the deepest part of Africa thing. Specifically, I want the media to retract the “posthumous” part from the stories of Governor Crist’s pardon.

Jimbo: Does a bear shit in the woods? Does Manzarek annoy the fuck out of you every time he opens his mouth?

RTH: Ha! Have you kept in touch with Ray? He’s dropped a lot of hints over the years that your death might have been staged.

Jimbo: Fuck no! On my long list of reasons to leave this mortal coil, Raymond was primo, numero uno.

RTH: But he talks about you like a brother? The two of you seemed unstoppable together.

Jimbo: Listen man, I don’t mean this to come off the wrong way, because I do love the man like a brother, like a beloved brother. True dat. But the guy’s intense! I got the rep of being the intense one, the high-maintenance, sensitive Dionysian fuck up, but you try living with fucking Paul the Apostle at your heels, telling anyone who’ll listen you’re the Second Coming.

RTH: He was like that when you were alive?

Jimbo: What do you mean?

RTH: I mean, when you were known to be alive. He was talking you up back then?

Jimbo: With me 2 feet away from him, like I didn’t exist!

RTH: But his musical contributions can’t be denied.

Jimbo: True dat. Raymond completed me. It was a lot to handle, though. I’ve read some of the shit written about me: Jimbo never recovered from his unstable childhood…Jimbo couldn’t settle the divide between his poetic sensibilities and his unhinged rock ‘n roll libido…Pamela was a she-devil. Listen, man: I drank and drugged and eventually checked out, primarily, to get Raymond off my back. Lord knows I tried to hook him up, but he preferred to hide in my closet.

RTH: Do we really want to go there?

Jimbo: We ARE here, brother. Raymond liked to watch, as they say.

RTH: OK, I know you don’t have a lot of time. Can I ask you for your thoughts on Oliver Stone’s The Doors?

Jimbo: Yeah, it woulda been nice if Meg Ryan had put out a little more. The scenes with her and the guy who played me—

Jimbo: Yeah, Kilmer. Some of the scenes with him and Ryan made me look like a regular gentleman, like the kind of guy my Pop would have been proud of. Fuck that… And what was with the glue-on facial hair in that film? Couldn’t one of those fuckers take a couple of weeks to grow real sideburns? The best part of that movie was when Nico gave me a hummer in the elevator. Of course, that was made up. Stone was probably too hung up to let the world know that it was one of drag queens hanging around the Factory. I’ve seen some other movies by that dude; I know where he’s coming from. He’s one of those fuckers who never turned on until he turned 30.

RTH: So why now, and what’s next? Can the rock world expect to see more of you?

Jimbo: The pardon’s all the difference. True dat. We’ll see if I get back to music, but now that I’m cool in the Sunshine State again I think I’m going to get myself in shape and hit South Beach in the spring. Listen, Mod, it’s been great talking. Gotta run! Keep up the good work with the blog. Don’t let those fuckers in the basement bring you down. A bunch of Oliver Stones, they are. Peace out!