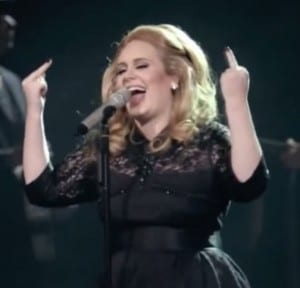 Once again, there isn’t much debate about who reigned the year in pop music. The clear choice is Adele. Other than “Hello”, few songs had such broad appeal and praise this year. Much like Taylor Swift in 2014, Adele swooped in during the last quarter of the year to deliver a song and an album that were considered a must listen. If you couple that with sales unprecedented by today’s standards, all that was missing from the chanteuse was a mic drop. But she’s too classy for that. Leave it to Taylor Swift to mop up all the adulation. She embarked on a victory tour selling out stadiums and surrounding herself with special guests (including rock royalty) in a vain attempt to bolster her brand and her cred. She wasn’t the only one jumping up and down saying “look at me”. One of the biggest songs of the year had a nation whipping and nae-naeing all over social media.
Silento and his hit song “Watch Me (Whip/Nae-nae)” is the modern update of “Land of a 1000 Dances”,albeit a terrible one. At first, I assumed the whole purpose of this song was an excuse to get your grandmother up at a wedding reception to see if she could do the “Duff” or the “Stanky Leg”. Plainly, the songs true message is in the repeated phrase, “WatchMe!” The song seems like a metaphor for these self absorbed times. Yes, watch me Instagram, now watch me You Tube, watch me Vine, now watch me Periscope, etc. You get the idea.