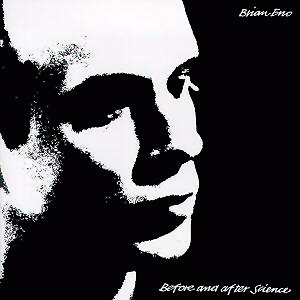 I’ve been listening to Before and After Science this week and got to wondering: Has Brian Eno ever given a clear answer on why he stopped making “pop” albums? If he did, do you buy his answer?

If he didn’t want to repeat himself, why did Eno follow his 4 song-based albums with all those ambient albums and even more albums that not even diehard fans can bear listening to more than a couple of times? After a certain point, don’t those albums sound like he’s on cruise control?

Think about his main production jobs after Talking Heads. as he gravitated toward the lyrical, spiritual bands U2 and Coldplay. There’s no reason to think he was only in it for the money. As the songs on Before and After Science mellow out I get the sense Eno is making his first and only efforts at writing lyrics that possibly mean something more personal than the outcomes of his random draws from a deck of Oblique Strategies cards or whatever it is one does with the I Ching. Is it possible Eno stopped making song-oriented “pop” records because he realized he didn’t have it in himself to express some deep inner yearning and universal messages, the way Bono and Chris Martin so readily do? (Not to mention his old partner in crime, Bryan Ferry.) Is his production work with those artists an indication of what Eno wished he could have done himself but felt himself lacking?

In a way similar to how sammymaudlin once speculated that David Bowie‘s “balls envy” was at the root of his producing Lou Reed and Iggy Pop, I wonder if the second half of Eno’s career was motivated by a sense that he lacked soul, or whatever you want to call it. Just a thought.