The Great 48 has submitted the following Critical Upgrade. I’ve never heard this album, only knowing their popular debut, which a friend burned me years ago and which I enjoy but wish was less silly. The Great One’s description of the band’s overlooked follow up makes me want to check it out. Let us know what you think and whether the Critical Upgrade filing is in order. 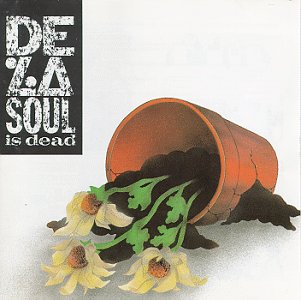 First, some set-up is in order: De La Soul was formed in 1987 by Kelvin Mercer (Posdnuos), David Jolicoeur (Dove), and Vincent Mason (Mase), three teenagers from Amityville, Long Island. That last part is important: De La Soul were the first important New York rap group not from the five boroughs, but from a middle-class suburb. Under the guidance of Paul Hudson (Prince Paul), a slightly older hip-hop producer who was also a member of the mid-80s group Stetsasonic, De La Soul got a deal with Tommy Boy Records and released their first single, “Potholes In My Lawn”, in 1988. This song, the chorus of which featured a jews harp and a yodeler, sounded basically like nothing that had ever come before in hip-hop, and when their debut album, Three Feet High and Rising, came out in the spring of 1989, De La Soul were immediately the hottest thing on the scene.

Some historical placement: although Public Enemy, the Beastie Boys, and some other acts were already expanding the sonic parameters of hip-hop, most hip-hop singles in ’88 and ’89 were still fairly simple, bare-bones affairs along the lines of Run-DMC’s hits. Three Feet High and Rising was worlds apart from that: the songs were still largely sample-based, but although Mase was nominally the trio’s DJ, their sound was created in-studio by Prince Paul and the group out of loops, samples, sequencers, live instruments and found-sound tapes, which made their music far more complex than anything else that was going on at the time. Listen to Three Feet High and Rising today, and unlike just about any other hip-hop record from 1989, it doesn’t sound dated. And it attracted a different sort of white audience than any previous hip-hop album: I can state for myself that although I was mildly interested in hip-hop and buying singles and occasional albums starting with the early run of classic Grandmaster Flash sides on Sugar Hill (other than Blondie’s “Rapture,” my first hip-hop purchase was Flash’s “It’s Nasty,” a great 1982 single based on the riff from Tom Tom Club’s “Genius of Love”), there was always a vaguely sociological angle, if you get what I’m saying. I barely had any personal connection to Run-DMC’s lyrics, much less Public Enemy.

But once you get past the proliferation of in-jokes, goofiness, and random nonsense on Three Feet High and Rising, the songs are about television, junk food, being slightly scared of girls even when you’re getting off with them (“Jenifa Taught Me”), moral equivocation on the topic of drugs (“Say No Go”), and personal identity versus conformity (“Me Myself and I”), topics that any suburban teenager of any race could get behind. Plus there were the samples. Along with the usual James Brown and George Clinton samples (that last song is built on Funkadelic’s “Not Just Knee Deep”), there were samples from Hall and Oates (“Say No Go”), the Turtles (“Transmitting Live From Mars”), Steely Dan (“Eye Know”), and of course the Johnny Cash sample at the end of “The Magic Number” that gave the album its name. This was music that a teenaged white boy from the ‘burbs recognized.
END_OF_DOCUMENT_TOKEN_TO_BE_REPLACED