If it’s not clear from the title of this thread, the following video is Not Safe for Work, excluding perhaps, those of you working as fishmongers and truck drivers. Take caution before clicking Play on this video.

Despite becoming a super-square and super-late-to-the-party fan of Ice Cube through his Barbershop movies and other mostly family fare Hollywood movies, I didn’t purchase any of his music until yesterday, when I bought N.W.A.‘s Straight Outta Compton album. I knew a couple of songs from that album and a couple of solo Ice Cube songs from mix CDs friends gave me through the years, and I liked them. However, I objected to supporting any band with a name containing any variation of the word nigger. Despite liking the music I heard from this crew, the band’s name and the frequent use of that word and constant cursing in their songs always struck me as that set of highly inappropriate and unnecessary things out there that I could easily avoid, much like I avoid buying a bag of pork rinds, no matter how appealing those things sometimes look to me.

Well, yesterday I bought this musical bag of pork rinds. I don’t know how or when I’ll be able to listen to this stuff. I don’t support the language, but the music is excellent. I even dig the nasty language in the context of the music, much like I dig extremely foul language and brutal violence in Martin Scorsese’s movies. For some reason, though, watching a movie with NSFW content in the company of other people doesn’t bug me. Listening to music that goes well beyond my personal rules for social engagement, however, is a more difficult hurdle for me to overcome. Why?

Is the way content is framed within a film somehow safer than the way the same content is framed within a song? We don’t drive down the street with our car projecting scenes from Taxi Driver for pedestrians and other drivers to see. Would I subject others to that if I could? I can’t imagine driving down the street blasting a song like “Straight Outta Compton.” That makes sense, doesn’t it?

When can I listen to my Straight Outta Compton album? Can I play it in my backyard with my fellow middle-age, upper middle-class white friends this weekend? Can I play it in the car, with the windows up, as I drive around with my boys, or even alone? Can I play it while I’m cooking dinner? Can I play it on my iPod while I’m working out at the gym? Do I need to beware of the people around me, in case they can hear the music bleeding through my headphones? You know, headphones aren’t my bag.

Do you see what I’m getting at? Do you run across this with certain NSFW music? I like being as free and easy as the next rock ‘n roll rebel, but are there limits? 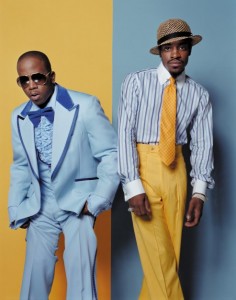 Mildly hip, white music fans are rejoicing over news that Big Boi and André 3000 will be reuniting OutKast in time for next year’s Coachella festival. Although no new OutKast recordings are planned, fans like Toby Wetland, 28, of Scottsdale, Arizona, can dream.

“I mean, like, it’s been so long since they’ve come up on my playlist” said an excited Wetland, outside his neighborhood Teavana. “I can’t even remember the last time I listened to their last album, whichever one it was—but it was incredible!”

At the Hanes Mall Teavana in Winston-Salem, North Carolina, Kayli Freebaugh, 31, gushed, “Oh my god, even though I skip over Big Boi’s tracks, there’s been an edge missing from André’s work.” She added, “I can’t wait to see hear what track advertisers pick up!”

Not all mildly hip, white music fans are ecstatic. Sipping a skinny Chai latte outside the Starbucks in Haddonfield, New Jersey, 37-year-old Adam Harrington gently rocked a 3-kid stroller and sniffed, “Unless Organized Noize is supplying the beats, I’ll stay tuned for whatever James Murphy touches next.”

Does any 30-year stretch of rock ‘n roll sound as similar to a non-rock ‘n roll lover from my grandparents’ generation’s ears as 30-plus years of rap sound to mine?

Honestly, I don’t want this thread to sound like the rumblings of an old white man, but I need perspective.

I own a few rap/hip-hop albums: a Sugarhill Gang Best of, a couple of albums each by Public Enemy and the Beastie Boys… I like them. Whenever I try moving beyond that small circle of artists (and trust me: I own some other rap/hip-hop albums and have had friends burn me collections of various artists in an effort to broaden my mind) it quickly sounds the same: people talk-singing in one of a couple of standard meters about a) how cool they are, b) how tough they are, c) how pissed they are that someone dissed them, or d) all of the above. Oh, and some of the more adventurous artists mix in “Eastern” beats and name-drop stuff that indicates a degree of nerdiness, turning on the likes of Quentin Tarantino: kung-fu movies, obscuro soul artists from the ’70s, ABA basketball legends…

I know this is a horrible generalization, but let’s hold a mirror up to my weakness, if not your own. Does any 30-year stretch of rock ‘n roll sound as similar to a non-rock ‘n roll lover’s ears as 30-plus years of rap sound to mine? Reggae? Rockabilly? Metal?

How do those of us in the know differentiate within one of these given genres? What would we tell me, for instance, to look for in terms of differentiation among rap/hip-hop artists?

This ought to be easy. All you have to do is pick one of the two options laid out below, from one-time children’s action figure model and occasional televangelist MC Hammer.

As always, it helps your cause to list a reason or two for your preference.

Version A: Lots of gangsta ho’s eagerly shakin’ they booty — but be warned: the price of admission to Hammer’s pool party is never being able to un-see the MC’s wedding tackle, barely restrained by his tasteful, zebra-striped banana hammock. Believe me, he makes darn sure you never forget it.

Version B: No tits, no ass, and no Hammer-wang. But much better choreography!

Wow, as I wrapped up a long day at work on a mighty 2 hours of sleep I just read that Adam Yauch of the Beastie Boys has died from cancer at the age of 47.  This feels sadder to me than most celebrity deaths involving artists I’m not particularly involved with. To be honest, there’s a chance I wouldn’t be able to tell you which Beastie Boy was Yauch if you showed me a picture of the three of them. However, I liked their team spirit, and no member of a team as funny and spirited as the Beastie Boys should have to die like that. I remember reading that Yauch was battling with cancer a couple of years ago, but come on, this was a guy pretty much my age with a lot of energy and a great sense of humor. He’d laugh his way through cancer and send it scurrying on its way.

It took me awhile to like much in the way of rap music, and to this day I’m skeptical of the genre, but the Beastie Boys’ appeal was hard to deny. They were in your face and funny, the way a couple of my friends were funny. Even before I liked any of their music I couldn’t help but like them, if only because they had tapped into a pop culture humor completely specific to my generation. The following fanboy video, in which a group of friends possibly much like my own mates re-creates the band’s amazing “Sabotage” video, says a lot about what made the real McCoys so lovable.

END_OF_DOCUMENT_TOKEN_TO_BE_REPLACED 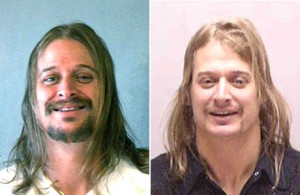 END_OF_DOCUMENT_TOKEN_TO_BE_REPLACED

Sylvia Robinson, founder of pioneering rap label Sugar Hill Records and a recording artist in her own right (“Love Is Strange,” as part of Mickey & Sylvia, and her solo hit “Pillow Talk”), died yesterday. You’ve probably heard this by now. My wife told me all about it late last night. I was really busy yesterday and spent what little free time I had recounting the wonders of Major League Baseball’s final night of the regular season and analyzing the coming playoffs. For placing my attention on baseball and missing this story yesterday I am sorry.

Sylvia Robinson was one cool cat.