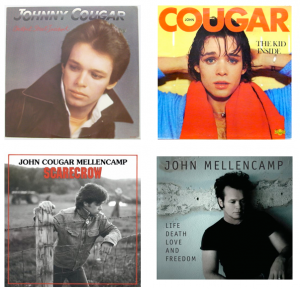 All of these Cougar/Mellencamps is not like the other

In order to put as much distance as possible between our terrifyingly brilliant hive of Rock know-it-all brains and Mod’s latest, most incomprehensible post about Fonzie’s light blue windbreaker, I suggest we put the power of the RTH Hive to work on a project that’s really worthy of our unique skill set: determining, once and for all, which artist or band went through the greatest number of name changes over its history. Lurker Sgtpeppermintpatty suggested this thread idea when he said he was having trouble determining an answer to this question on his own. Stroking his beard thoughtfully, the Sergeant looked across the office divider that separates us and wondered aloud: “The way I see it, it’s a tie between John Cougar Mellencamp and Jefferson Airplane. Both went through three name changes.”

In a flash, I leapt across the office wall and grabbed him by the lapels. I slapped his cheek, as if to wake him from a deep sleep, and screamed, “WHAT IS WRONG WITH YOU?! Johnny Cougar has had FOUR names over his career!” I grabbed a handful of his hair and steadied myself to bash his forehead into his computer monitor — you know, to teach him a lesson about accuracy in rock trivia. It was then that I stopped, frozen. Frozen with shame. Frozen with confusion. I stopped myself because I had to admit: *I* didn’t know who really held the coveted band/artist name change title.

I released the Sarge from my kung-fu grip, and leaned back against the fabric wall that separates our workstations. Hands trembling, I fished in my breast pocket for a cigarette. Beads of sweat formed on my forehead and I felt vaguely sick. A hypocrite — that’s what I was. A know-nothing, an idiot. I had to make good on this situation. But I needed rules. It wouldn’t be good enough just to pick a band that had 15 different incarnations as unrecorded teenagers before hitting it big. No, rule number one had to be: your names don’t get counted when you’re not recording for a label you don’t own. Wiping the blood from his upper lip and spitting out busted teeth like corn niblets, SPP suggested that there’d have to be a maximal mathematical band member change percentage to ensure the band’s name wasn’t changing because the band itself really had changed. We decided on a maximal band member change percentage per name change of 25%.

With these rules in hand, we felt prepared to face this question head-on. But we still need your help. So pitch in. Muck in. Do your part. Help us unravel this mystery. Please.

26 Responses to “The Mellencamp Factor: the Artist or Band With the Greatest Number of Name Changes”