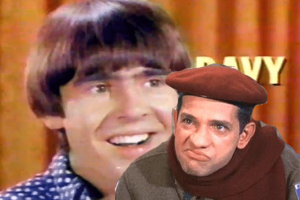 A few years ago my wife got me hooked on Hogan’s Heroes, a show I enjoyed as a kid but never subscribed to, if you know what I mean: I had little rooting interest in the characters and plotlines other than an instinctive love of Newkirk’s turtleneck and sideburns. As an adult, however, I realized what a comic genius Werner Klemperer was as Klink, not to mention the comedic support provided by dummkopf Schultz. Bob Crane’s Hogan is an outstanding wiseass character, who my wife pointed out is very much in the vein of one of my old college friends. They’re all great, even LeBeau, the little Frenchman in Stalag 13, who used to annoy me with his spells of overt cuteness when I was a kid.

Every few years since childhood I tune into reruns of The Monkees. Once I even rented a DVD of the second season from Netflix. Each time I try revisiting The Monkees the show gets worse. I still enjoy seeing them lip-sync to one of my favorite Monkees songs, but the wacky hijinx style, which was innovative in its time, looks more and more like the Nickelodeon tweener sitcoms my boys used to watch when they were of that age. And speaking of spells of overt cuteness, I don’t think a single entertainer’s cutey-pie routine has ever annoyed me more than Davy Jones’ act. Not when I was a kid. Not to this day. If I want to gorge on cuteness I’ll watch a Shirley Temple movie. That’s cute! Davy just strikes me as the worst kind of attention-seeking ass kisser.

Look at me! Aren’t I adorable? And don’t you love my British accent? Here, let’s have a little tap dance!

Yuck! Any time he shows up and gets a few lines on an episode of The Monkees I want to denounce my fairly strong case of Anglophilia.

Over the last 2 years, as I’ve grown to admire and love that little French rascal Louis LeBeau, I’ve had a recurring thought: What if LeBeau replaced Davy Jones in The Monkees? The benefits, as I see them, would have been mind blowing, show altering, and even extend to exerting positive influences over Mike Nesmith and Mickey Dolenz’s burgeoning egos.

9 Responses to “The Replacements (Not the Band…): Swapping Louis LeBeau for Davy Jones in The Monkees”