Many of you already know that I went to high school in Africa, in a small mountain kingdom called Swaziland. Swaziland was a wonderful place to be a teenager for all kinds of reasons—wide-open spaces, little in the way of “rules” (though the everybody-knows-your-parents-personally Mayberry vibe of the place kept things healthily in check), no real way to fuck yourself up other than booze and some godalmightyblowyourheadoff pot, and… motorcycles. Everybody in the 16–18-year age group had a bike of some size and shape, though almost all were off-road or dual-purpose jobbies.

The off-road capabilities of these bikes were very important, as Swaziland didn’t have too many roads back then. Plus, the preferred method of driving out into the countryside to get loaded was to organize a caravan of dirt bikes, with one of us borrowing a pickup truck (a “bakkie,” borrowing from nearby South African slang) to actually transport the crates of Castle Lager required to achieve the desired effect.

But I digress. (Ah, sweet memories! Strange that I’ve forgotten the skull-crushing hangovers, and omitted the stories about Adam Elliott pissing all over my bike in a fit of drunken pique about something, or Goff Haw waking up with his head on a vomit-encrusted pillow, moaning woefully, “I’m swimming in puuuuuuke!”) 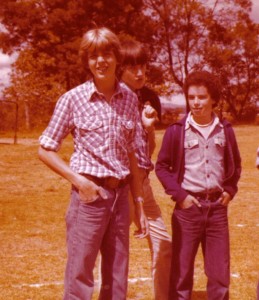 The point here is that I may be the only RTHer who ever actually pulled a Judas Priest/Rob Halford motorcycle move on the rock stage.

See, as a pimply-faced 16 year old, I managed to bring together four or five of my closest music-loving friends to form a band. The cast of characters was an odd one, by virtue of the fact that there just weren’t very many people to choose from. Nobody could afford to be a member of a “subculture,” since we had trouble enough finding a roomful of people to agree on a culture to begin with. There was Peter “Pubes” Horn (drums)—at the time, five feet tall and so upset about his height that he grew a five-inch pile of hair on the top of his head; Alan Kang (bass), budding computer genius who mooned hopelessly after school hottie Dawn Sherper; Richard “Ski” Zwierczowski (piano), who smoked so much dope that his hair and his teeth turned orange; David “Bertie” Bertram (vocals), who once famously totalled his mom’s Citroen in a drunken stupor, then polled the dudes in the back seat as to whether they preferred to go home or haul the unbroken bottles of beer back to his house for a party; and, of course, me (guitar). I suppose my claim to fame in this bunch was that I was the jive talker, the asshole who usually got us into trouble and was the first to talk his way out of it. Thus, I was occasionally known as “Con.”

Together, this band of losers was known as, uh…well, when we played school assembly, we were called, um, the Flunk Punks. Hey, we were 16, and living in Africa, for fuck’s sake! We didn’t know from cool! 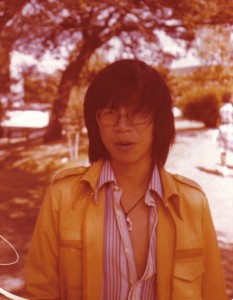 Anyhow, the school assembly gig was fast approaching, and we were in conceptual disarray, as always. Bertie, who eventually went on to join the Merchant Marines and now works for a shipping concern in Durban, was concerned about his Look, and dubious about the jumpsuit we urged him to wear as frontman. Kang, who eventually did become a computer genius, and now teaches the subject in university somewhere, was apparently genetically incapable of being funky. Kang’s job was to lull the audience into thinking we were going to play one of the school favorites of the day, “Another One Bites the Dust,” after 30 seconds of which the rest of the band would roar into our stirring, proto-rockist anthem, “Disco Is Dead!” © Bertie/Con Music, Inc. Unfortunately, whenever Kang played anything on the bass without a band behind him, it came out in 3/4 time. Imagine the opening bass notes to “Another One Bites the Dust” played as a waltz, and you’ll get the idea. Ski, who, I think, eventually went crazy, had just discovered the wonders of “jimson weed,” some kind of naturally ocurring hallucinogen, and refused to play anything other than AC/DC songs. He could not be budged on this point, so we had to add “Rock and Roll Damnation” to our set list to appease him. He agreed to sit at the piano and appear bandly during the other numbers, though he would not play. Peter, who eventually grew up to be a six-foot accountant, was impatient. And I, who eventually grew up to be an underemployed composer for film and TV, needed to come up with some kind of galvanizing focus for this impending disaster.

22 Responses to “The Rock Town Hall Christmas Story Is Retold”