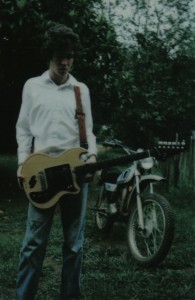 As has become a bit of a tradition ’round these parts, on this festive day of the year, I present you with the annual telling of my greatest moment of rock embarrassment — namely, the story of The Day I Rode My Motorcycle On-stage at School Assembly and Proceeded to Suck Mightily. This year, however…there’s more!

First of all, there are pictures to share, culled from dusty old photo albums–including, as you’ll see above, a picture of the actual motorcycle! I wish I had pictures of all the members of the “band,” but there seem to be just a few in my possession. Perhaps more illuminating, I’ve managed to gather a few recollections of the event from other members of the Flunk Punks! This year, I managed to track down two: David “Bertie” Bertram and Peter Horn. Peter was characteristically taciturn about the whole affair, but Bertie remembered something I’d long since forgotten: the Flunk Punks “groupies!”

Anyway, the story proceeds below, followed by our star witnesses’ commentary. Enjoy, and–best wishes for the season, RTH!

I’ve already exhausted this topic with my close, personal Facebook friends, but since some of you are not part of that hallowed crowd (and some of you don’t even use Facebook), let me re-post it here. (For those of you not on Facebook, this was posted in response to a rash of musicians listing 30 cool bands they’ve shared a stage with.)

I’ll break down and join in on a self-serving 30 Bands I’ve Shared a Stage With post, grouping bands thematically and in alphabetical order. (Apologies to any artists I’ve sincerely forgotten.)

Last night my wife and I went to see Neil Young at Philadelphia’s Academy of Music. We got an invitation earlier this week from old friends. It was a great show: all acoustic, great sampling of all that’s great and even occasionally larger-than-life lousy about Neil (eg, a didactic, 2-song “Environmental Hymns” set that Neil of October 2014 clearly felt compelled to perform). His between-song banter was really funny. He played one of my favorite Buffalo Springfield songs (“On the Way Home”), surprisingly made a cover of Gordon Lightfoot’s “If You Could Read My Mind” (see clip, above, from his Boston show a few nights earlier) his own, and then some. The guy was all THERE: his songs, his performance of them, etc. We had some great laughs and bad pizza with our friends after the show. I went home feeling really good about the world.

What’s the deal with musicians performing barefoot? Are they not aware that a lot of electricity is surging on stage? It’s not like they’re performing on a beach. Aren’t they afraid that a clumsy bandmate might step on their foot? Or that a pointy guitar might impale a toe? What motivates any musician to go barefoot on stage? Beside a drummer, who might make the case that they have a better feel for their kick drum and hi-hat pedals when they play barefoot, does any other musician have much use for their feet beside standing on them?

I’m not the world’s most dedicated follower of barefoot fashions, but I’ve got no beef with being barefoot around the house, on the beach, or in the yard. You may have a beef with my gnarled toenails, so I don’t make a habit of going barefoot in the homes of people I don’t know well. I respect those “No shoes, no shirt, no service!” signs when I go out to dine. Why would I want to stand on an elevated stage and play guitar with my bare feet at eye level with hundreds or thousands of fans?

What’s your take on barefoot musicians? Is it cool? Sexy on anyone beside a young Linda Rondstadt? Disgusting? Do you find it distracting, as you fear for their safety? If you are a musician of any stripe, have you ever performed in bare feet?

So last night, Mr. Royale and I got our aging butts out of suburbia and headed into San Francisco to the new San Francisco Jazz Center. Marc Ribot was performing there for four nights, with each night highlighting one of his different styles; we chose to see him in his Los Cubanos Postizos incarnation. The band did not disappoint: Marc and the other three original members were in amazing form, and it was a pleasure to watch their interactions, their nods, their signals to each other. I don’t know if I’ve ever seen or heard such fluid intra-band communication.

But there was something really wrong about the night: the venue. The show started at 7:30 (not the doors, the music), and we got there late (early? at 6:30) and hadn’t eaten dinner, so decided to grab a quick bite in the Jazz Center’s restaurant, “South.” Inside the white and glass interior, we were able to eat healthier, more expensive versions of classic Southern cuisine. I love me some biscuits and collard greens, but Ouch! the price tag was a bit rich. After rapidly making our way through our meal, we dashed inside just in time to catch the start. We sat in amphitheater-style seating (noting the plastic armrests and drink holders that could hold $12 plastic cups of wine), in an air-conditioned, large, battle-ship grey room. Our fellow music appreciators were seated around the small stage, but when the tempo sped up, folks got up and politely went to the back of the room to dance. The one act of debauchery I saw during the two-and-a-half-hour show was a woman skipping up to sit in a vacant seat in the front row. She lasted about 25 seconds before a clean-cut middle-aged man escorted her out. We were done, walking out the door, by 10 pm. All in all, it felt like a Disney Theme Park, an IMAX theater, a cleaned up, safe-for-aging-beatnik fans experience. I have seen the future and it is me?

I don’t know what I was expecting. I was happy that I wasn’t surrounded by jerks holding their phones up to take pictures or video, and this was certainly the first show in recent memory that I didn’t want to yell at some nearby couple, “Get a room!” But something was really missing. Fast-tempo latin music seems to need more than such a slick, comfortable venue. Where was the funk?

I could continue ranting about these weird juxtapositions of band and venue. I’ve seen plenty of bands in crappy music halls, beer-stinking bars, high school gyms, and hangar-like arenas. Sometimes the space was too small for the loudness of the band (I’m talking to you, Moon Duo). Sometimes a horrible show was redeemed when I heard the same set in a different space (Hello, My Bloody Valentine). Sometimes the smell of weed heightened the experience (Tame Impala!) and sometimes I thought, WTF (Arcade Fire?).

Please join me in my further understanding of how a band’s venue heightens or detracts from the musical experience.

Was Fear‘s 1981 performance on Saturday Night Live the first example of the Made for TV Pit Audience phenomenon, which has become de rigueur for VH1 spectacles, the Super Bowl halftime show, and the like? You know what I mean by Made for TV Pit Audience, right? It’s the elite group of “insiders” of an artist’s fanbase who are strategically encouraged to rush the otherwise guarded pit area so they can show the rest of us how the featured artist truly deserves to be admired and adored.
I suspect something’s missing in the story of this “anarchic” Fear performance on SNL. The hardcore kids slam dancing and stage diving didn’t just happen to get tickets to that night’s performance, did they? They didn’t just happen to be standing at a cleared-out spot at the foot of the stage. They were audience props. They were actually the reason for booking Fear, despite whatever story has long been told about Belushi wanting them on, which may in itself have been true. Fear’s appearance on SNL would have added up to nothing without those hardcore kids placed in the pit to show the rest of America how it was done. 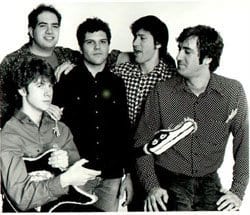 Nixon’s Head: $25-$200, depending on night of the week, position on the bill, and delusion that festival appearance would actually lead to any meaningful exposure.

Congratulations! Your long lost Auntie Selma just sent you a check for $150,000. Sure, you could invest it, perhaps buy a house or make some charitable donations. But forget all that stuff, you should blow it all booking bands for your very own music festival. Luckily, the internet has just provided us with a list of acts and their prices.

Your simple challenge: From the provided list, choose the bands you want and whatever you do, don’t go over budget.

I look forward to your show, Dave Matthews tribute band notwithstanding.