ERIC: I was a bit surprised by “Astrovan”–the first time I heard it was at one of Amy’s solo shows and suddenly she was singing what I took to be a love song about some bloke in Cleveland. Then it turned out to be about a stolen car and I was a bit relieved!

AMY: I’ve done writing with other people, mostly when I lived in Nashville, where we’d sit down, drink coffee, talk about things and three hours later have a couple verses and a chorus. With Eric it seemed important that we find our own collaborating style. To actually be in the studio with any instrument you’re willing to pick up and see what comes out.

RTH:Eric, how did you get into making records with the Stiff crew? Did you have much musical or recording experience before that time? Did you go back a ways with Ian Dury and his band?

ERIC: I played in bands in Hull, where I went to art school. Ian had a band called Kilburn and the Highroads. We idolized him but I didn’t know him back then. I moved to London in 1976, Stiff Records started up and I took in a cassette of my songs. They called and asked me to make a record. So I did. Ian was managed by Blackhill Enterprises, who owned the building and had offices upstairs. Nick Lowe introduced us and we became close friends. Ian played the drums in my band. He started doing that because his girlfriend played bass with me. I think he thought we were having an affair but we weren’t, we were busy rehearsing. We stole a fire-damaged Olympic drum kit from an overpriced secondhand shop. We knew it was fire-damaged because it was covered in a film of black grease and it smelled like a barbeque. It had a notice on it that said “Fire Damaged.”

RTH: When you hear old stories about a label like Motown, you hear of the artists clamoring for the attention of Berry Gordy and the main producers/songwriters, like Holland-Dozier-Holland and Smokey Robinson. Was there any of that going on in the old Stiff days?

ERIC: I think they clamoured for bottles of beer. Or cider. Especially The Damned. The first time I met Nick Lowe he cadged the price of a bottle of strong cider off me. We got fairly drunk. Stiff wasn’t quite as slick as Motown in the early days. Later on it was more show-biz than Motown and infinitely less cool.

Len Bright Combo, “Someone Must’ve Nailed Us Together”

RTH: The Len Bright Combo recordings were very cool. I don’t know if many folks know about those albums, especially in the States. Were they as fun to make as they are to spin?

ERIC: The first album was fun – it cost 86 English pounds to make (about $150) and we got national airplay. Some people were affronted by it so that was a laugh, and a result. The second album was a bit more fraught because there were power struggles – the bass player, Russ Wilkins, wanted to be the producer. He told us we didn’t know shit about recording and that sort of confused me because I’d made quite a lot of records by then and so had Bruce Brand. Bruce left and married a mad woman who didn’t like us. They got divorced, I had a nervous breakdown, and Russ moved to Scotland.

RTH: How did you get hooked up with The Milkshakes scene? Did those guys live that circa 1964 lifestyle outside of their recording and performing lives? I imagine them existing only in black and white.

ERIC: Life in the Medway could be a pain in the arse. It was quite fascistic – there were strict guidelines concerning guitars, amplifiers and the use of effect pedals. No equipment made later than 1971 was pemissable. The only allowable effect was a fuzz box. I used a Binson Echorec and a cheap overdriver/compressor called a Loco-Box. So I was really out on a limb. The local hipsters didn’t really warm to the Combo. Some of those people were quite politically retarded too. 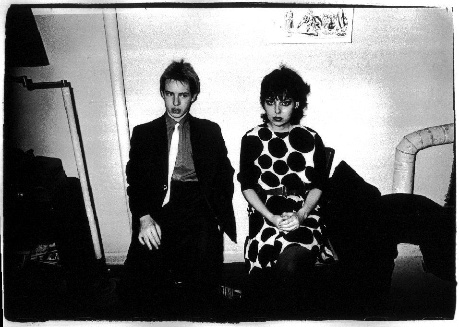 RTH: Amy, I first saw you as a member of The Shams, opening for Matthew Sweet, I believe. If memory serves, your music back then was in line with what you’d be doing as a solo artist. What were your earliest bands like?

AMY: My early bands all grew out of the little world my brother Michael and our friends created in lower Manhattan in the late ’70s/early ’80s.We started a club on St. Mark’s called Stinky’s with a dirt floor and a shrine to Frankie Lymon in the bathroom, and that turned into Tier 3, where we all worked and hung out. All kinds of odd bands like Ut and Eight Eyed Spy played there, and even groups from England like The Raincoats, The Slits, Rip Rig & Panic, and though it hardly seems possible, Madness. I played drums in my first band, Stare Kits, with Michael & Angela Jaeger (who later sang with Pigbag and David Cunningham) and our friend Bob Gurevics, but we didn’t last long. A few years later we got Sue and Amanda (who were southerners and also in The Shams), and that turned into Last Roundup. Female harmonies, one- or two-chord songs, people playing washboards, spoons, and sandpaper blocks – primitive attempts at “hillbilly” music because if we didn’t have drums we could rehearse in Michael’s apartment.

RTH: Amy, since the release of Diary of a Mod Housewife you’ve been rightfully lauded for working the domestic joys and struggles of an everyday, ’60s- and punk-loving artist into your music. Your blog is also a fun and even touching read for the same reasons. You provide a refreshing point of view in a music world that typically favors high drama. Do your fans ever stay long after shows or write you, hoping you’ll play “Dear Amy” for their domestic questions?

AMY: I’ve always loved songs that pinpoint specific moments of life–“Ode to Billy Joe” had a huge impact on me, with homey details like “pass the biscuits please” in there among the drama and intrigue. The closer the detail, somehow the more I can project myself right into that story and I try to do the same with writing. So I always like to talk to people and hear about their lives, though anyone familiar with my songs would know better than to ask me for advice.

Amy Rigby, “Down Side of Love”

RTH: Eric, beside what I hope is a nice stipend from the exposure “Whole Wide World” has gotten since Will Ferrell sang it in Stranger Than Fiction, did it mean anything special to you to see one of your “babies” get its due after so many years of relative obscurity?

ERIC: I didn’t end up earning a fortune out of it, nothing like. The film company were not really that open about exactly how much of the song they were in fact using. Stiff Records were not that thrilled when they found out after the negociations were completed that the song was so important to the plot. I probably shouldn’t say that but fuck it – they got the song for cheap. But never mind, I got through to a lot more people and “Whole Wide World” sold 100,000 downloads last year. Think I’m on two cents a download, so dinner’s on me!

RTH: Following are some questions in our Dugout Chatter segment.