AMY: His brain works faster than his mouth – terrifying.

RTH: Besides Eric’s own numbers, what’s your favorite 2-chord song?

ERIC: Are there any others?

RTH: Do your French neighbors and fellow rock fans appreciate hearing phrases in their native language used in rock songs by non-French artists, such as those in “Michelle” or “Psycho Killer”?

ERIC: They think it’s funny. Apart from the ones that don’t get it, they just think I’m stupid. I try not to play “Reconnez Cherie” in France, but I get quite a lot of requests for it.

AMY: The French seem to get a real kick out of hearing their language butchered – but ONLY in song.

AMY: “Sick Day” by Fountains of Wayne. “Another Day” by Paul McCartney.

ERIC: “Dogs” by The Who, or “Tattoo” or “Odorono”. Or “Waterloo Sunset” by The Kinks. Possibly “Subterranean Homesick Blues”, that’s quite domestic and everyday – “the pump don’t work cos the vandals took the handles”…

ERIC: Definitely Will Ferrell singing “Whole Wide World”. In spite of what I said earlier I love his version and I think Stranger Than Fiction is a really, really great film. I’m proud to be part of it.

ERIC: Elvis looks like a knock-kneed pigeon. I look like one of Herman’s Hermits. Take your pick. The sad thing is that I don’t think Elvis thought any of it was funny. There’s a copy of my first album propped up on the piano in our local bar. If anyone touches it the proprieter goes mental. So I’m more of a local icon than Elvis. I doubt that he’s got the same sort of thing going for him in Twickenham or Dublin or wherever he lives. 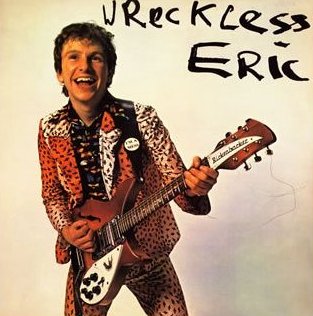 RTH: What’s your favorite song by your partner – songs from your new album excluded?

ERIC: My latest favourite is “Don’t Ever Change”, but it might be “It’s Not Safe”. It’s also “O’Hare”, which I don’t listen to too often because I don’t want to lose the feeling it gives me.

AMY: “Whole Wide World” – I always get excited to hear it. “Take the KASH”. “Same” (from Bungalow Hi). “Just For You” (from Le Beat Group Electrique). “Kilburn Lane” (from 12 O’Clock Stereo by the Hitsville House Band).