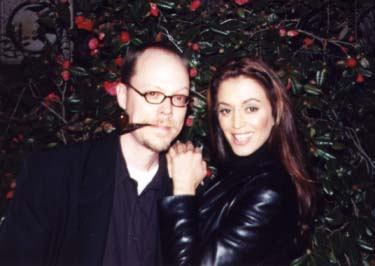 Schlitt with fan at the Playboy Mansion, March 2002.

Rock Town Hall recently caught up with former Head East lead vocalist and founder, John Schlitt, moments before ducking into a rehearsal with his re-formed, brief-lived, post-Head East band, Johnny, to prepare for a short tour later in April that will take the band to Hudson, WI; Fort Yates, ND; Peoria, IL; and Sioux Falls, SD. “I’m really sorry I don’t have much time,” said Schlitt, while graciously accepting our unexpected request for an interview, “We’ve got a lot of work to do!”

Schlitt left Head East in 1980 to attend to “personal demons,” as he put it. “Rock ‘n roll took me to the edge. I wasn’t sure I’d ever back off until He gave me the tug I needed,” says Schlitt of the Lord. “I’ve gotta give credit to my wife, as well. The stuff she put up with…” he told me, trailing off meaningfully.

To clear his mind and keep true to his calling, Schlitt retired from the music business for 5 years before being asked to audition for the Christian rock band Petra. “They trusted I had the chops,” he says of his new suitors, “They only had to be certain that I was a true Christian.” He certainly was, and the next 20 years took him to unforeseen heights. “Those years were a blast,” Schlitt recalls of his time with Petra. “You think performing for 20,000 kids high on cocaine and Coors is something else, try playing to 2000 believers for the glory of God!”

We only had a few more minutes to chat, and the obvious question was Why a Johnny reunion? Why now? “We were in a lot of pain at that time,” he says matter of factly. “Not just me but the other guys. We were searching for…something, but we had no idea how to get there.” A couple of months ago Schlitt ran into a few of his buddies from Johnny at a funeral for the band’s roadie. The old friends spent the night revisiting their failed aspirations, praying, and eventually jamming. “It just felt right,” says Schlitt, “even better than right, if you know what I mean. Like it had been part of the plan.”

Unlike Petra and Schlitt’s solo work, the reunited Johnny will not be a Christian rock band per se. “We’re still playing the would-be hits, so to speak, that Johnny set out to play: ‘Show Me More,’ ‘Fast ‘n Nasty,’ ‘Just Another Motel Bed’…” The difference, he says, is that the band will play these rocking numbers sober and in the service of a Higher Power. “We’ll seek teaching moments throughout the tour,” he explains. “We trust that our audience will see the characters in our songs as part of a greater morality tale.”

In reviewing the band’s upcoming tour schedule, I noticed that Johnny happens to be booked in each town a night after the current touring version of the reconstituted Head East. You may think this coincidence would trouble Schlitt, but that’s not so. “I welcome following Head East. Although I’m a Christian, I am not free from the sin of pride. Let their fans come back the next night to see the real voice of Head East!”

One Response to “The Rock Town Hall Interview: John Schlitt of Head East”