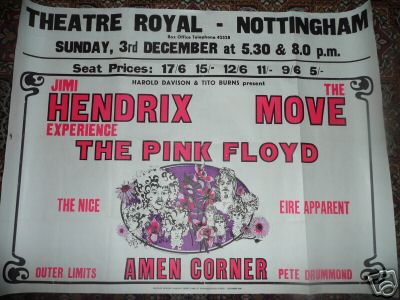 Pink Floyd: The "The" Years

The Kills. The Killers. The Liars. The White Stripes. The Hives. The Ravonettes. The Black Keys.

Mr. Royale and I have noticed that many of the new garage-y bands have affixed a “The” to the start of their name. It seems to be a nod to some previous rock era (’50s–60s) when band names began with “The.”

But then there is another retro era (late-’60s–’70s?) when bands started to dispense with “The” as a start to their name. Cream. Fleetwood Mac. Procol Harem. Iron Butterfly. Love. Pink Floyd. Steppenwolf.

What happened to take away the “The?” And how radical was that? Am I missing something here or was there a paradigm shift? Who was the first band to go it alone and ditch the “The?”

For the musicians among us, how did you decide whether to append the “The?” Was it a way to create a “look” or signifier to a previous rock era? A friend who was in a pseudo-well-known band in the ’90s shared that it was very important that the “The” not be attached to the start of their name. Ditto Pixies, Talking Heads, et al.

And then there are the bands whose names start with Thee…

I look forward to The Commentary.