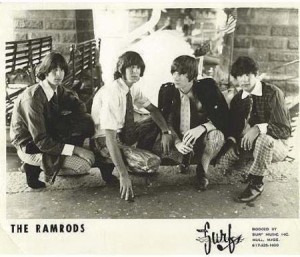 Please note: they were also Rockin’.

Greetings, seekers of good, cheap music! I come before you with a couple of songs gathered from local thrift stores that I’m sure you’ll enjoy. Both are good examples of the kind of music I pick up just because the title appeals to me. And who could pass up the opportunity to give a spin to a tune called “Don’t Fool With Fu Manchu”? Here it is, as performed by Boston garage crossover artistes The Rockin’ Ramrods.

I swear, I have the best luck when I buy stuff just because the title sounds interesting. Money isn’t the only — not even the main — reason I do this, but a year or so ago I found a busted-down single in a thrift store. It was on the Dixie label (never heard of it), and it featured “Hangover Blues” on one side, and “Satan’s Wife” on the other. I had to buy it, despite the fact that it looked like it had been run over by a lawnmower. Turned out the damn thing was worth hundreds of dollars (well, maybe not in the beat-up condition my copy was in) — and with good reason; “Satan’s Wife” is a great song. Here’s Jesse Floyd performing the number for you. Please join me in imagining that Jesse and his gang of drunken hillbillies recorded this huddled around a Sears & Roebuck tape deck in the lantern-lit living room of a Tennessee mountain shack; the Internet tells me that the Dixie label was an offshoot of a larger concern that devoted itself to small-run vanity pressings for country folk who had home-grown tapes they wanted the world to hear.

As always, I look forward to your responses.