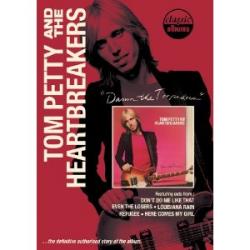 The first thing that strikes me about the Classic Albums series’ making-of documentary of Tom Petty & The Heartbreakers‘ Damn the Torpedoes is the British Invasion-era guitar porn that was on display in the early days of the band. There are all varieties of Rickenbackers, including the relatively cheapo one that Tom holds on the album cover and that John Lennon played in early Beatles’ shots. I came real close to buying one of those in high school, but I didn’t like the way it played. There are the classic Ricks, both 6- and 12-string variety. There’s Tom playing a Flying V and a Firebird. Mike Campbell plays some cool guitars, too, mostly along the classic Fender and Gibson lines, but nothing beats a shot of Tom playing a 12-string Vox! Now, that’s cool!

Early on Petty and his mates speak of the band’s mix of British Invasion and southern rock and soul. As Petty, Campbell, and producer Jimmy Iovine, the latter looking like a modern-day James Caan character in the best-preserved Members’ Only jacket on the planet, sit at the mixing board and breakdown the smash hits from this album it all seems so simple – too simple. You might find yourself thinking, “Gee, Petty’s whole bag is so simple why don’t more people make records this solid? Shoot, why didn’t I make this album?” It’s part of the magic of Tom Petty and his band that such a straightforward, traditional sound backing such straightforward, down-to-earth lyrics can work so well, especially on Damn the Torpedoes, which for me has always been the one Petty album (Greatest Hits excluded) worth spinning more or less from start to finish.

0brHGJ6xqbk][/youtube
Iovine, we learn, was recruited to produce the band’s third album, after two albums with early champion Denny Cordell. The band loved his work on Patti Smith Group‘s “Because the Night, ” especially the big drum sound, which was engineered by Shelly Yakus, who for my money is one of the stars of this video. Despite the band’s emphasis on getting a big drum sound – or maybe because of it – there were doubts about the abilities of drummer Stan Lynch, who would be let go from or leave the band a few albums later. Petty and Iovine do not comment on Lynch, but Yakus and the other band members discuss Lynch’s penchant for playing way behind the beat as well as his renegade spirit, which seemed out of character with the rest of the wholly focused, support members of Petty’s band. Ron Blair and Benmont Tench suggest that Petty and Iovine were behind efforts to replace Lynch, which included a couple of weeks of auditioning other possible drummers. Weird! One of the things that’s always attracted me to Damn the Torpedoes is Lynch’s drumming and the way the record presents the drum sound. Lynch is interviewed as well, and he seems like a reasonable guy about the whole affair, which is pretty cool. The band members seem so reasonable you may find yourself thinking, “Why didn’t I make this album with my reasonable bandmates?”

The confidence and competence of Petty and his bandmates are impressive. Benmont Tench is as clear-headed and articulate as you would expect a guy named Benmont to be. Man, who wouldn’t want Tench and Campbell in their band? There’s a clear sense of hierarchy and lack of ego among the band members, and you can tell they sincerely rally behind their leader, who comes off like the smartest dude who’s smokin’ in the boys’ room.

A few quibbles with this documentary compared with previous Classic Albums episodes: The synchronization/sound from board when isolating tracks is sloppy. Campbell and the person rolling tape off camera aren’t always on the same page. Individual tracks aren’t given much time, and too often the band members’ voices, as they talk about a part, are much louder than the track I want to hear. Compare the mixing board scenes with the spirited, clearly audible segments from the Who’s Next episode as an example of what’s lacking. Of course, The Who documentary involved a much more animated, pushing-at-the-boundaries group of musicians. In terms of overall tone, a better comparison with the Damn the Torpedoes doc might be the Classic Albums episode of Pink Floyd‘s Dark Side of the Moon, which soberly captured the work of another band of focused craftsmen.

Also most likely a function of the musicians being featured and their working practices, this doc seemed a little thin on stories behind the songwriting and arrangements. Sometimes I’d hear Petty talk about how he wrote some incredibly catchy song in 10 minutes and think to myself, “Why didn’t I use my 10 minutes of inspiration to such effect?”