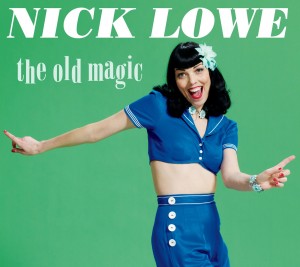 One of the hazards with any of KingEd‘s Insta-Reviews is the chance that his gut feelings on a new release will not hold over time. Although Rock Town Hall stands behind even the most bile-filled reviews of our self-appointed King of New Music Reviews, we reserve the right—and believe we owe it to our readers—to occaisionally revisit one of his pieces, such as his recent review of Nick Lowe‘s latest album, and offer consumers a more balanced, clear-headed review that will better reflect the refined tastes of our readers and advertisers. In that spirit, I have taken the past week to let Nick Lowe’s The Old Magic sink in over repeated listens.  I hope my review will stand as an alternate point of view for consumers’ consideration.

Up to this point, Nick Lowe’s “mature” solo career has been an incidental affair, something that has surfaced in the interludes between public radio interviews and photo shoots. His previous releases — 1998’s Dig My Mood, 2001’s The Convincer, and 2007’s At My Age — were earnest, respectable efforts that offered their fair share of pleasures but did not establish a distinct or significant new musical identity for Lowe apart from his Jesus of Cool persona. The Old Magic finds Lowe taking a giant step — not away from the shadow of his Rockpile-era works but beyond what that understandably history-bound artist has been able to achieve on record in recent times.

In terms of consistency, craftsmanship and musical experimentation, The Old Magic surpasses all his solo work and any Rockpile-related album since Labour of Lust. It does so by returning to the dance beats, big grooves and modern edge that have characterized Lowe’s best work. The key to all Lowe’s classics — from “So It Goes” and “Marie Provost” to “Cruel to Be Kind” and “I Knew the Bride” — is that they are built from the rhythm up: The Old Magic, which was almost entirely constructed around Lowe’s rhythm guitar, is a return to that modus operandi.

Lowe has poured his heart into this album. The strongest songs — “Sensitive Man,” “I Read A Lot,” “Shame on the Rain” and “Restless Feeling” — are also the most candidly personal. In the past, he has slipped into personae — the Born Fighter, Little Hitler, God’s Gift to Women— but he lets his guard down to an unprecedented degree on Magic; the beautiful ballads draw on feelings of loneliness, vulnerability, spiritual yearning and, as always, life with the ladies.

These gains in maturity have taken no toll on Lowe’s inner rock & roller. The Gai-Gin Man can still swagger at the top of his — or anybody else’s — game. The Old Magic resembles Lowe’s best albums in that it’s a varied yet cohesive collection of ballads, retro rockers, and one country song. But at his age, he is free to cast off the pub-rock anchor that both defines and (at times) confines Lowe.

Making the most of this opportunity to stretch himself, Lowe has recruited some outstanding guests, many of them younger artists whom he directly influenced. John McEntire of Tortoise collaborates on the wistful, melodic opening track, “Stoplight Roses,” which boasts authentic tank reverb. Jeff Tweedy of Wilco produces and co-writes “Restless Feeling,” a soulful cocktail shuffle, featuring background vocals by Neko Case and Kelly Hogan, that evokes the sweeping romanticism of any one of the Nat King Cole-influenced numbers from his previous three albums.

On “You Don’t Know Me at All,” one of my favorite tracks, Wyclef Jean helps burnish a subtle ska-cum-Memphis-inflected groove. Employing some of his most moving and nuanced vocal phrasing, he confides, “Well you don’t know mad from sad/You don’t know ‘splainin’ from complainin’/You don’t know next who you’ll be blamin’/And you don’t know me at all.” The lyrics portray a guy who’s got it all — fame, fortune and the means to indulge any materialistic and hedonistic impulse he might divine — but is wise enough in his late middle age to know there’s something more out there.

“Checkout Time,” a rollicking, country-tinged collaboration with Jim James of My Morning Jacket — and featuring an indelible guitar hook from Nels Cline — offers a revealing glimpse of what Lowe is seeking: “I’m 61 years old now/Lord, I never thought I’d see 30.” The mark of My Morning Jacket is overt on “Checkout Time,” but the band’s influence subtly courses through the rest of the reverb-heavy album; like James and company earlier in the decade, Lowe has adapted modern rhythms and contemporary production techniques to his own naturalistic rock & roll ends.

“Somebody Cares for Me,” featuring Clap Your Hands Say Yeah’s Alec Ounsworth, is a Tex-Mex rocker floating within a New Orleans gumbo. No one walks quietly and carries as finely carved a walking stick as Lowe. The tight blues shuffle “Poisoned Rose” is highlighted by some brief but fiery gutteral singing from Lowe. Like a good blues workout, it leaves you hungry for more, and this masterful use of tension and restraint is part of what makes The Old Magic so beguiling.

It may seem a truism, but it’s worth noting that he is — along with John Hiatt, Richard Thompson, Conor Oberst, and Win Butler — one of the great songwriters of this age. And he is in exceptional form on The Old Magic. If anything, Lowe’s voice is rounder and warmer than ever, and he brings a new richness of phrasing to the heartbroken, confessional, extraordinary closing track, “‘Til the Real Thing Comes Along.”

After all of the excursions undertaken on The Old Magic, Lowe brings it all back home with this last number, which is a musically rich and lyrically reflective ballad in the grand tradition of The Drifters. Lowe offers unabashedly human, vulnerable sentiments, akin to those expressed by Mick Jagger on “Brand New Set of Rules,” from his superb solo album Goddess in the Doorway.

It is a clear-eyed and inspired Nick Lowe who crafted The Old Magic, an insuperably strong record that in time may well reveal itself to be a classic. World, meet Nick Lowe, mature solo artist.