JW: Two guys mentioned in the book most clearly represented those two poles for me, Bill Lee being someone who seemed like he could have easily walked through our mud room door alongside any of my parents’ friends, while Steve Garvey represented that far away ideal of a “real American.”

RTH: Former Expos reliever Don Stanhouse actually stumbled across your blog entry on one of his cards and contacted you. Have other present or former players found their way to your writing?

JW: Of course I can’t be 100% sure that it was the real Don Stanhouse who sent a vaguely intimidating message to my site, but it’s nice to think it was really him. Not much else has happened in the way of contact with the real world of baseball, though I think John Montefusco’s sister weighed in on a comments thread about the Count. I’ve also really enjoyed the periodic “brush with greatness” (or “brush with mediocrity”) stories from other baseball fans who read the blog. One of my favorites was a guy who emailed me to tell me that he was friends with Buzz Capra and that Capra is a nice guy and is still in possession of his Mets cap that Pedro Borbon gnawed on after the Capra vs. Borbon undercard to the Rose-Harrelson brawl during the ’73 playoffs.

RTH: Your peak card collecting years are about 2 or 3 years behind my own period (ie, 1971-1977), but you probably collected during some of the mid-’70s years that had anecdotes and little cartoons about the players on the back. If so, does any anecdote stand out for you after all these years? (For instance, on my deathbed, as my life flashes before my eyes, I will recall a mid-’70s John Lowenstein card that reported that he once hit 4 home runs in a Little League game.)

JW: My favorite was the cartoon on the back of Jeff Burroughs’ 1974 card—it said “Jeff likes watching TV” and had a cartoon of a guy in a baseball uniform holding a TV in his glove.

RTH: Can serious card collectors, the guys who hermetically seal their treasured mint-condition cards, commune with their cardboard gods the way those of us who still keep them loose and frayed in shoeboxes do?

JW: Yes, I’m sure they can, though the mode of communion is probably a little different. When I first noticed sometime in the 1980s that kids had begun treating their cards so carefully, I looked down on it as a joyless, economically motivated development, 10-year-olds protecting their investment like little stockbrokers instead of using the cards for fun. But taking care of cards is certainly not a bad thing, and I’m sure that anyone who keeps up that practice beyond childhood—who becomes a serious collector—has to have a passion for the cards that has forged as deep a connection as I ever could in my own much more card-ruining way. Dave Jamieson’s recent book Mint Condition offers a fascinating history of baseball cards that features enjoyable portraits of some of the more serious collectors through history, and these guys (yes, shockingly, they are all dudes) were and are all not just connected to the cards but in some deep way shaped by them, and they all took great care of whatever cards they got their hands on.

RTH: Have you read Robert Coover‘s The Universal Baseball Association, Inc., J. Henry Waugh, Prop.? I know you’ve played Strat-o-Matic Baseball and other baseball board games. Did you ever give a particular player an extra roll of the dice or otherwise cheat, while playing by yourself, to give that favorite “god” a better chance of succeeding?

JW: Yes, I love Coover’s book. I played a lot of solitaire Strat-o-Matic as a kid, and somehow I knew that if I started cheating it would blow the whole deal. I mean, it would really be just me alone, rather than some situation that had some of the unpredictable elements of interactions with the actual world. So I adhered to the dice rolls and periodically had tantrums when the dice rolls weren’t going the way I wanted them to. I punched a dent into the sheetrock of my room one day when the 1982 Strat-o-Matic version of my favorite basketball team, the Celtics, were unaccountably getting slaughtered by the 1982 Kelly Tripucka-led Pistons. 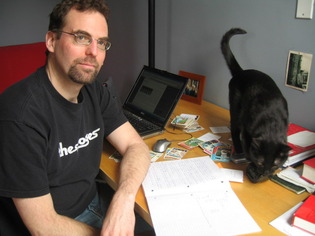 The author as Stooges fan and cat lover.

RTH: When you got into your later teens and college years you also turned to record collecting, right? Does staring at album covers hold any similar godly insights for you? What’s an album cover that means something special to you?

JW: I actually started buying records as a kid, and one of my earliest purchases is among the most memorable in terms of album covers— KISS: Alive II, which featured shots of all four guys in the band, including my favorite, Ace Frehley, as well as, most spectacularly, Gene Simmons drooling blood. Records and the covers they came in do have a lot of meaning to me, and the novel I was working on for some years before turning to my cards was an earlier stab at telling the basic story of Cardboard Gods and was structured as a double album, my attempt to channel into fiction the multi-voiced “back to the land” albums of The Byrds, The Grateful Dead, and The Band. The first album by The Band is one from my childhood that I stared at a lot, the guys pictured on the front becoming extended parts of the family almost. I also felt this way about the very familiar longhairs on the cover of Let It Be.

NEXT: Josh Wilker sits down for a round of Dugout Chatter!