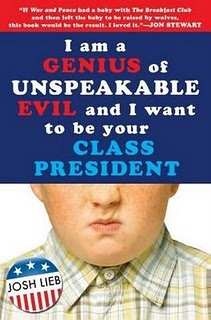 Children’s books aren’t what they used to be. My daughter, for example, is reading the novel I Am a Genius of Unspeakable Evil and I Want To Be Your Class President by Josh Lieb. It’s story of Oliver Watson, an evil genius disguised as dorkish new boy who wants his father’s love and will do anything to get it. Yep, anything.

Even introduce middle grade kids to Captain Beefheart and Trout Mask Replica. Oliver explains to the reader why Beefheart was an evil genius:

…a musician so brilliant, so evil, he drove his own band insane. He would not let them eat. He would not let them sleep. He would not let them leave the house. He made them wear dresses (and they were not girls). He stripped them of their very names and subjected them to hours of abusive group-therapy sessions. When a dejected and desperate member of the Magic Band managed to escape the Captain’s clutches, Beefheart snatched him off the street and dragged him back to the practice studio.

It was cruel. Assuredly. Inhumane. Undoubtedly. Evil. Disgustingly so. And yet I defy you, today, to listen to Trout Mask Replica and say it was not worth it.

Being in step with the times, ie, aping Diary of A Wimpy Kid like mad, we also get a photo of Beefheart and the Magic Band in their pomp. And the cover of Trout Mask Replica. To a generation raised on Taylor Swift and Justin Bieber (whoever he is!), explaining Captain Beefheart isn’t easy.

Townsmen and Townswomen – how do you explain Captain Beefheart to a child of the 21st century? Where would you start? What song by Beefheart might best explain his strange magic? When I gave Doc At Radar Station a quick spin my daughter fled the room with ears covered.

6 Responses to “Case of the Punks”