After buying his first guitar in support of his friends’ son, Chris began learning the songs of The Beatles, Elton John, James Taylor, and other childhood favorites. He’d play his kids those songs before they went to bed. “So I’m learning and absorbing these songs that I’d naturally gravitated toward, and everybody thinks it’s great, it’s fun. I’m embracing something I’ve loved my whole life.”

Then, as his son’s 10th birthday approached, his wife suggested he write a song for him. “What?!?! I don’t know how to write a song. I’ve never written a song!” His wife wouldn’t let up, he continues, “So she leaves me there kind of slack-jawed. It was the weekend and I found myself as a dad, with soccer and all…No one was home, so I had a window of time. I grabbed my guitar, sat and meditated, then BOOM, a song about my son’s birth spilled out. I thought, That’s incredible.”

A debut performance of “Splittin’ the Atom” for his son and family followed. “It was emotional, and I thought that was it, a one-time thing. And then our daughter said, ‘Will you write me a song?'” He replied, not as confidently as he would have liked, “Sure, honey!” After repeating the same process that led to his song for his son nothing clicked. “I’d read about this, and I realized it just has to come.” A few weeks later he was having a discussion with a fellow father at the pool where his kids swam and an idle discussion about oil unlocked the idea of “Love Could Run the World.”

From this point he was hooked. Songwriting presented new challenges to Chris’ everyday life. “There was a phase of taking these songs that came out of the blue over a period of about a year of intense, almost psychosis, where I’d be working with clients—I’m a rolfer—where I’d be doing intense cranial work that requires the utmost silence and sensitivity, and all of a sudden I’d hear a complete chorus in my head. I’d think, ‘Whoa, this is trippy.'” On his breaks from work he’d hole up in his office with his guitar and figure out the chords he was hearing.

Amodeo finds himself in for the long haul as a musician, but he’s not “chasing the dream”; he’s living it. He hopes other music lovers will take a chance at making music. “Even people in the music industry ask me, ‘Why do you want to get into this now, don’t you realize it’s dead?’ [I tell them] This is not my intent; my intent was not to get into the Music Business. My intent is not to be a pop star.”

Instead Amodeo is committed to writing about life as he knows it. “Up to this point I’ve spent the last 21 years in this little magic box of therapy,” he says, referring to his rolfing work, “working with other humans on a one-on-one basis, and all of it is about personal transformation.” It’s this notion of personaltransformation that he finds at the root of his lyrics. “I guess I have more say at this point in my life than I would have as a young man,” he adds, “I probably would have talked about cars and women—both awesome subjects, but I probably would have been hamstrung content wise.”

After writing his first batch of songs, Amodeo experienced an “explosion of creativity” while integrating shamanism into his rolfing practice. He explains, “I was going out to the desert and working with Peruvian shamans, then flying out to Utah and then going down to the Amazon.” One night he decided to play some of his songs for his class of 109 students. Then and there one of his students offered to put together financial backing for what would become the Homo Luminous album. (See what I meant about the two Olivers in the introduction, Sacks and Stone?) 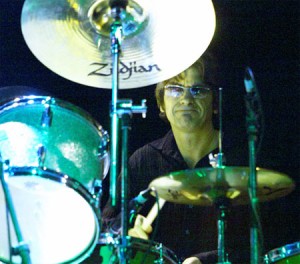 A 5-month period of learning how to work in a studio with a band followed. Chris and his friends would marvel over this opportunity. “They’d say, ‘Dude, if nothing else ever happens how many people get the opportunity to go in the studio and be given carte blanche to make a record?'” An experienced studio band, led by veteran drummer/producer Ray Weston (Robert Palmer, Tom Jones, Big Audio Dynamite, Bjork, Bill Wyman, Andy Summers et al) walked him through the ropes. Over time he learned to talk to musicians.

The band, which is rounded out by members who’ve worked with Ronnie Spector, The Motels, David Gilmour, The Rolling Stones, and Vanilla Ice, would eventually guide the novice Amodeo from the sobering confines of the studio to the electricity of the stage. A show at The Coach House this past October was his first actual club show following nothing more than a few low-key coffeehouse-type performances. A show at LA’s legendary Whiskey-a-Go-Go is being lined up. When told of this offer the level-headed, late-blooming musician couldn’t help but tap into thoughts of The Doors and “all these teenage fantasies.”

Back to earth, Amodeo has no illusions about “making it,” in the traditional sense, but he’s open to…miracles. “There’s a part of me that’s still wide-eyed, but I just laugh. I’m having fun with it. People tell me, ‘Oh yeah, you’re gonna have to struggle…’ but you know, I have no interest in slogging it out in bars for years. This came about so cosmically. Maybe it won’t happen like that, maybe it will just unfold and there’ll be a certain audience and it will just open up and I won’t have to beat my head against the wall or feel like an abject failure if Wembley doesn’t book my next show. It’s like when I work with clients I’m always open for miracles to happen…then I’m prepared for getting down and doing the work that’s necessary.”

Next…Chris Amodeo faces a round of audio Dugout Chatter!