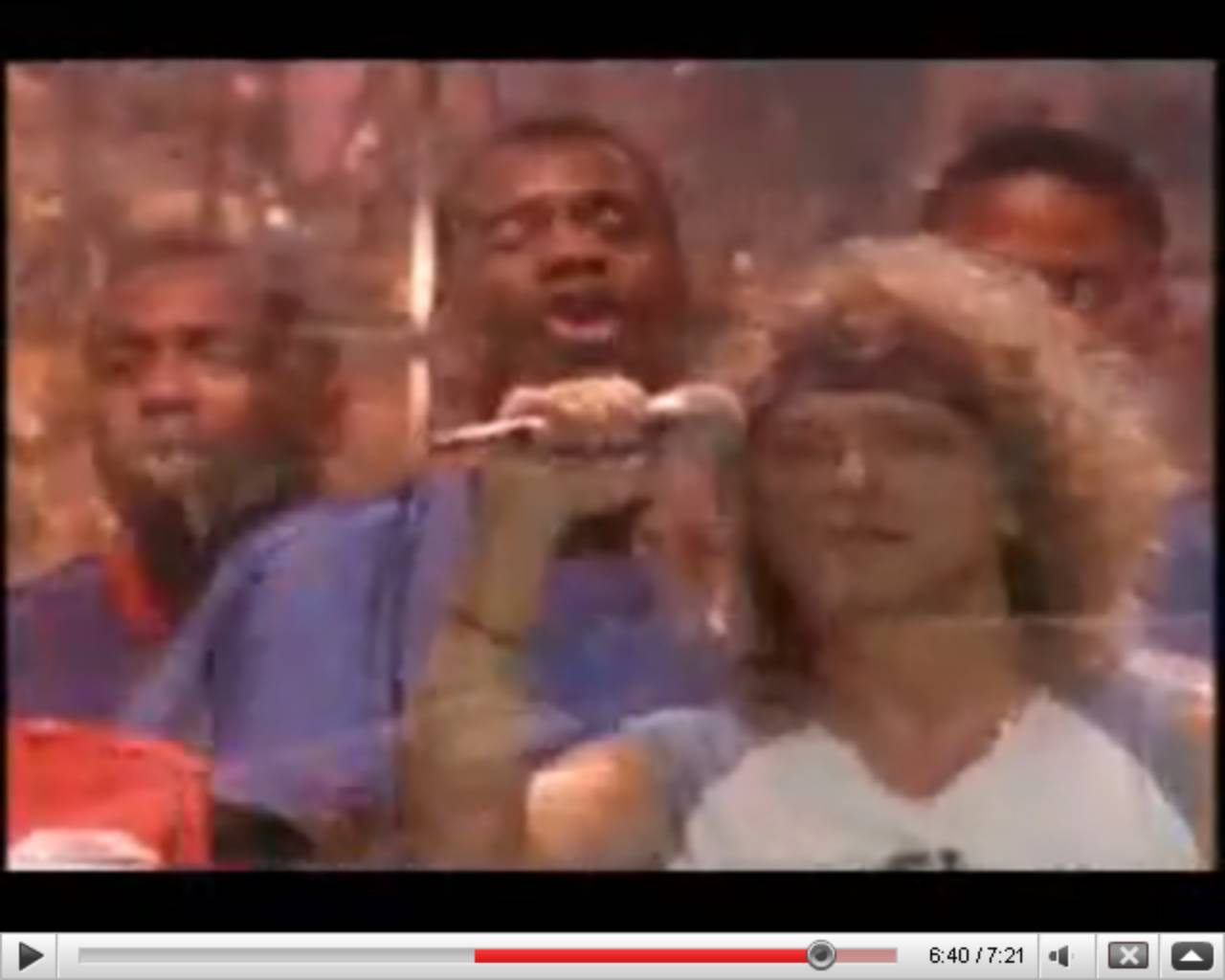 Yesterday’s celebration of The Day the Music Died took me through a range of emotions as I’m sure it did you. While we wind down from the festivities, I’d like to get back to a theme that I would like to work through with you over the course of the month, in between all our other fun and self-important rock discussion activities: Exploitive Black Rock History Month.

As I said in my introduction from a couple of days ago, I’d like us to do our best to explore and bemoan recurring, cynical, exploitive uses of what are typically considered black people’s musico-cultural achievements to add color (my apologies for the unavoidable pun) and credibility to the performances of primarily white rock artists. I’d like to kick off this discussion with an examination of possibly the most egregious and overused of these cultural abuses: the employment of the African American robed choir.

When did this practice begin? Can we blame it on Foreigner? Growing up, I don’t recall Elton John or David Bowie ever being backed by an African American robed choir, but sometime in the early ’90s it became commonplace.

Those of you who know me probably are aware that I am not a proponent of cursing…
…but this practice fucking pisses me off more than any cheap, exploitive ploy ever used in rock.

Before I go any further, I’m sure there are probably a few instances in which churchgoing or at least highly spiritual artists have found the need to call in a choir choir with which they have first-hand familiarity and a mutual respect for the mixing of the choir’s holy mission with the artist’s spiritually relevant song. Bob Dylan, for instance, spent a couple of years merging his spiritual and musical journeys with the aid of gospel singers.

As far as I know, however, he never wheeled them out in public dressed them up in brightly colored church robes. Even in this clip of the gospel musicians coming back together to re-record his songs from that period the participants had the good taste and respect to refrain from dressing up like they were taking part in Easter mass.

It should also be noted that I’ve got nothing against choirs, be they composed of African American churchgoers, boys, or Bulgarian women.

The live Dylan clip also reminds me that at some point we’ve got to address the question of whether it’s all right for rock musicians to hire “colored girls” as back-up singers. I have no beef with this practice. If you have music that will benefit from the tonal qualities that may be inherent in a singer of a particular race or region, go for it! Singers are not just musicians; they’re also instruments. The same way a guitarist might choose a Gibson over a Fender, a lead singer may choose back-up singers with an “African American” tone over, say, a white “New Yawk” tone (eg, Ellen Foley). In short, the Rolling Stones, who’ve employed both a boys’ choir and African American backing singers are most likely off the hook in this discussion. 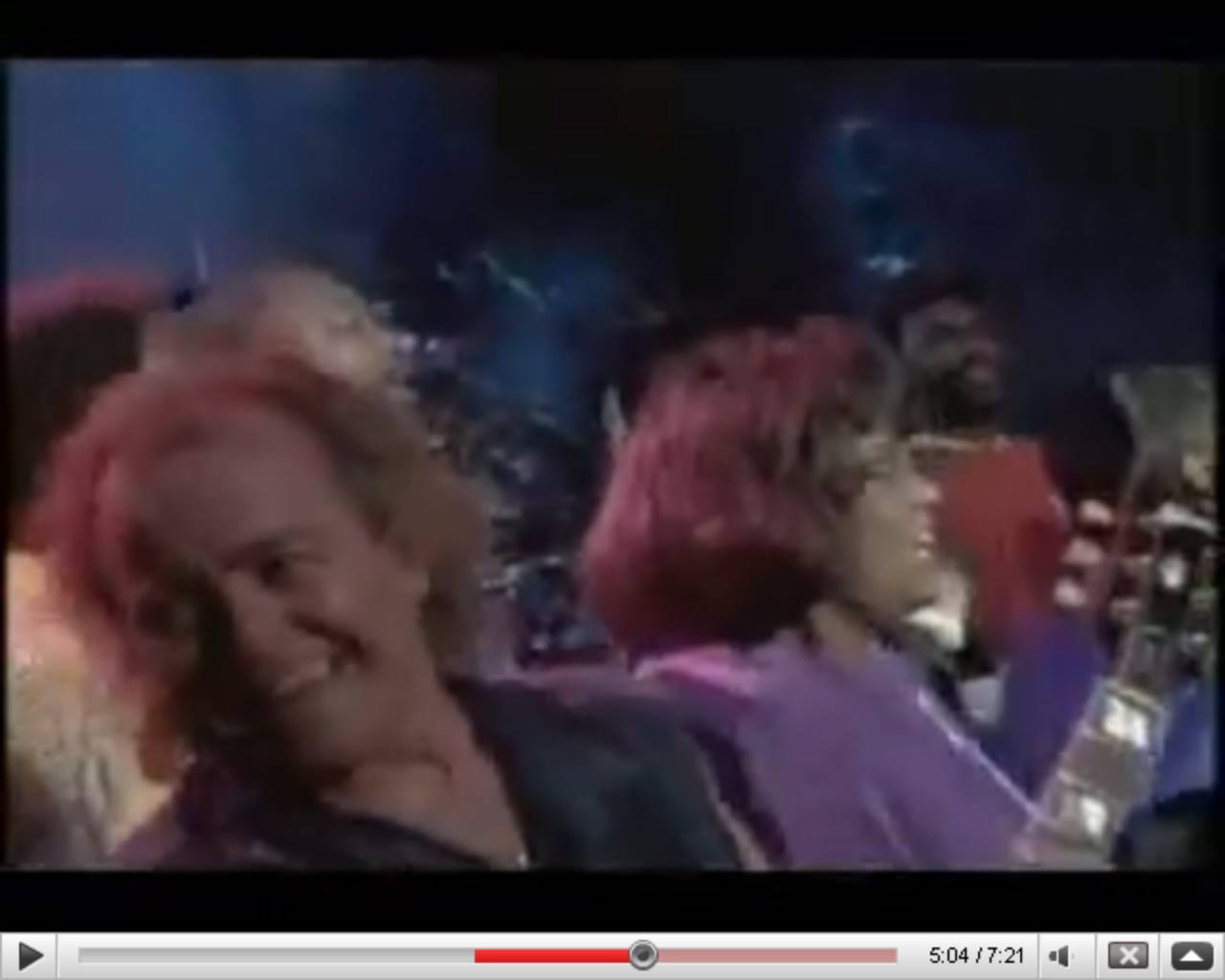 What I object to, first, is the practice of an artist almost certainly dialing up an African American robed choir to couch the artist’s most likely sincere and at least somewhat spiritual song in the added credibility of both The Lord and a choir of True Believers. Because, as we all know, no one believes more than 40 smiling African Americans swaying back and forth in brightly colored robes!

Ugh! Just the thought of that last sentence embarrasses me on behalf of my entire white race. White rock fans should be made to pay reparations to their nearest predominantly black churches each time a rock artist pulls this move. Trust me, I’ve got no beef with choirs, African Americans in brightly colored robes, The Lord, and so forth. It’s the cynical use of these elements strictly for show that offend me so. Any rock artists who actually attend religious services on a regular basis or at least thinks of some higher power more often than when they lose a parent may be excluded from my wrath, especially if they have developed a real relationship with the robed choir hired to spruce up their, say, Super Bowl performance. Let’s break down some of the particulars.

Choirs hired to back rock artists can dress nicely. Certainly! The robes, however, are a costume that are meant for use in the church. Do these same rockers attend church in their cool-guy stage gear, their leather pants and shades? Hell no! Rockers should respect the Separation of Chancel and Rock Stage ask the choir to keep their special occasion robes in the closet, awaiting appropriate use in the service of their Lord and congregation.

Of course, the Separation of Chancel and Rock Stage guidelines that apply here assume that the robed choir is actually a working church choir. I’d be curious to know how many of these African American robed choirs that are wheeled out on stage for cynically “unifying” purposes are even real choirs. Townspeople, your collective research powers surely will determine whether The Boss’ choir from the Super Bowl was indeed a working choir or chorus members from a Tampa production of Cats dressed in secular, theatrical robes meant to look like the blessed kind that real church performers wear. I’d even be happy to know the name of the congregation from which the robed choir backing The Boss at Obama’s Lincoln Memorial Concert came. Please tell me they weren’t standard-issue showbiz wannabes outfitted by Hollywood!

As for rock musicians employing any devices that connote the influence of a Higher Power, especially human devices, I find this aesthetically objectionable. If the artist truly wants to pay tribute to the notion of gospel, that is, god’s words being spoken through his or her song, awesome, but isn’t the one of the greatest aspects of god’s omniscience, if we put any credence in that notion, that it’s here for us to receive when we’re good and ready to receive it? A great song that expresses something spiritual is likely to get through to listeners without the support of an African American robed choir jamming the message down our throats. Has any African American robed choir ever successfully jammed an otherwise inherently flawed song and/or performance down anyone’s throat? That new single that The Boss performed at the Super Bowl, for instance, may be an all right song once I get around to hearing the studio version, but with Miami Steve croaking offkey alongside The Boss no choir was gonna save that particular performance.

What gets me more than anything, however, is both the outright stereotyping of African Americans as having inherent spiritual powers coupled with the appropriation of that stereotype for something beneath the misguided compliment intended by the stereotype in the first place. Christ Almighty, I’m aware of the role music and religion have played in African American culture, but the image of a large African American choir singing and dancing ecstatically to the music of Mick Jones and Lou Graham is not what the stereotypical spiritual powers of African American choir singers were created to serve. If you’re that hellbent on giving a dog a bone, at least give it a bone worth chewing.

Finally, I’ve considered whether the employment of an African American robed choir by an African American pop musician singing a pop song is ever appropriate. Perhaps, but I can’t think of a case in which the use of this device has been acceptable. Aretha Franklin or Al Green singing gospel or Christmas songs backed by a robed choir does not count.

Above is a performance of “Jesus Walks” by Kanye West. This is a real humdinger of a stage show, breaking just about every Separation of Chancel and Rock Stage imaginable. However, at the risk of running into The Sincerity Fallacy, I’d bet this is a credible and sincere representation of something of Kanye’s culture and upbringing meant to bolster themes of the song deserving of such devices. You’ll notice, in terms of this discussion, that West artfully avoids use of the robed choir, instead letting the staged congregation act as his choir. This performance’s ever-so-narrow avoidance of so many exploitive uses of black musico-cultural devices in support of a pop song is brilliant and should serve as a guide for our discussions throughout the month. (The angel wings at the end, though, are a real aesthetic buzzkill, but for reasons that do not exploit African American culture.)