Being a rebel, an outcast of sorts had its merits when it came to certain girls. Over the course of my first 11 years at this tiny school, I justifiably earned a reputation as a hot-headed, judgmental tight-ass, not only for throwing hissy fits, elbows, and haymakers at a moment’s notice, but for taking unpopular stances in my roles as newspaper editor and member of student government. Although I was a straight-edge, dedicated student who actually loved school, the fringe kids respected my role as a troublemaker within the “establishment.” Whereas they got under a teacher’s skin by nodding off in class and repeatedly failing to turn in homework, I disrupted classes by firing off rhetorical questions and contrarian comments that just barely managed to stay relevant to the class discussion. The kids bored by standard lesson plans sometimes congratulated me in the hallway for sticking it to the Man. 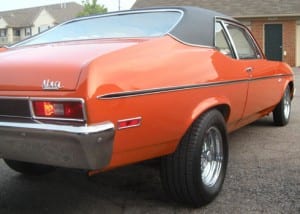 NOT the actual Devil Stallion.

One malcontent, Lisa, a bright, bawdy, heavyset, wild-haired kid who idolized Janis Joplin and made little attempt at demonstrating her intelligence in a formal classroom setting, warmed up to me during study halls. She liked to get me wound up over political topics, which I was learning was another surprisingly effective bridge topic for talking to girls. She poked at my combative, conservative leanings on issues like affirmative action and the death penalty. She’d lean forward with a sly smile as I spouted off, finally interrupting my rant: “You can’t fool me!” She saw through me. It felt good to be seen through.

Then Lisa would steer the conversation toward common ground, such as feminism, pacifism, and rock ‘n roll. She knew how to scratch the hippie hellraiser I was at heart. Prior to these study hall and lunchtime debates, I found Lisa the furthest thing from physically attractive. As I would experience years later, however, while watching clips of Janis Joplin perform live, Lisa took on an unexpected beauty as her fiery spirit came to the fore. Even more attractive, after joining in on a few conversations, was her softer, warmer stoner friend, Amy.

Amy’s long, thick reddish-brown hair fell into a perfect center part. When she smiled, her mouth slowly expanded across the full width of her face and her eyes rolled back gently. Unlike Lisa, who drove me out of my protective cover with a stick, Amy drew me out through a series of questions, the way one waves a string on the ground in front of a cat hiding under the bed. I might have been a curiosity to her, and although there was an element of mockery behind her questions, I was more than fine with the attention. As much as I desired to cover her Chesire Cat smile, I didn’t have a clue how to get out of the batter’s box.

Before I knew it the Junior Prom was upon us. Our tiny private school had so few “normal” high school events that I wasn’t about to miss this one. I took a girl from outside our school, Lori, the daughter of one of my Mom’s friends. I’d hung out with Lori regularly in my early pubescent years, as our Moms got together and laughed through the struggles of their divorces. Taking Lori was a great no-pressure move. We were buddies, and she was great looking to boot. For the prurient among you, that’s about the beginning and the end of my high school “dating” life.

More attainable goals during my last 2 years of high school revolved around music, especially with my baseball fantasies banished to left field. After seeing Syd and Crymson Myst perform at assemblies and dances, Andy and I set our sights on this humble goal. While the members of our school’s established bands had attended a wealth of concerts, our experience with real, live rock ‘n roll shows through Junior year amounted to seeing the Cars and the Police, and, prior to that, Andy seeing Barry Manilow with his parents in middle school. However, we’d been watching a lot of rock movies and absorbed many important lessons regarding stagecraft.

With a meager catalog of a half dozen originals (and I use the term loosely) and another half dozen half-baked covers, our “band practices” consisted of journeys to Philadelphia’s revitalized South Street for cultural and film studies as often as times when we actually plugged in and worked to create the distant sound in our heads. The lower blocks of South Street in the late-1970s were prime cruising blocks for Philadelphia’s bohemians, punks, and would-be boho-punks. The place where “all the hippies meet,” as the Orlons sung back in 1963, had rebounded from lean years in the late-1960s and early-1970s that sunk property rates low enough for a new generation of artists and aspiring artists to revitalize the neighborhood. We’d pack into my orange 1972 Nova, complete with a black vinyl roof. The car was dubbed the “Devil Stallion” by Duncan. We’d make our way to South Street and circle the loop on Bainbridge Street until we found or made parking. Yes, sometimes a group of teenage boys could make a parking space by lifting the back end of a small car and rolling it forward. Once parked we’d dash to our giddy cruise up and down South Street, getting a whiff from the doorstep of our rock ‘n roll future.

Circa 1980, South Street was anchored by two rock clubs that naïve underage kids like ourselves could only peek into as the doors swung open for legal patrons: the long, narrow pub JC Dobbs and the hippie-era holdout Grendel’s Lair. The former was known to us as the Philadelphia outpost of nearby Wilmington, Delaware’s George Thorogood & the Destroyers, not to mention the city’s unsigned local legends, musicians we’d meet a few years later who in still held onto dreams of being the next Bruce, the next Dylan, the next Bowie, in one case all in the guise of a single local musician. The latter flew its faded freak flag with an endless run of a nude play called Let My People Come. Grendel’s also hosted the first Philadelphia appearance by the Police. Some minuscule number of people were said to have attended that show, so few that people didn’t even bother to lie about having been there. A few years later our eventual fully developed band would make its debut at the latter, while the former would become a regular haunt and a hotbed of our own breakthrough dreams.