We had carefully crafted songs based closely on real songs that we loved. From the start, my approach to songwriting often began with a sincere attempt to learn a record by ear before giving up and refitting the couple of riffs I could approximate for a dumbed-down forgery. Our execution was piss poor regardless, but Seth was never to blame. He was always worlds ahead of us as a musician. You could tell he had already been learning to play drums. His first year of lessons, before we met him, consisted of nothing more than learning the rudiments on a practice pad. I think he told me he did nothing more than grip his sticks for 3 months prior to that. By the time we found him he had a full year on a full kit under his belt. He could set a beat and pretty much see it through. I could barely play my own riffs, parts I “adapted” from 1960s singles like the Doors’ “Break on Through,” the Music Explosion’s “Little Bit O’ Soul,” and the Count Five’s “Psychotic Reaction.” My student, Appice, rushed ahead of the beat, eager for a chance to play his take on a Buddy Holly chord solo, those quickly strummed intervals up and down the neck in lieu of individual notes. Rhythm solos fascinated us as we half-learned “Not Fade Away” and the Buddy Holly-modeled “I Fought the Law.” They were easy covers to learn, at least poorly. Appice would later get his rocks off like never before when he started to figure out Pete Townshend’s more complicated intervals in the Live at Leeds version of “Sparks.” More on that unfortunate tale later. 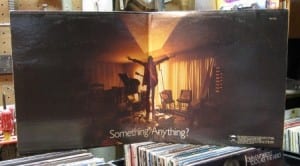 Andy did his best to power through our overreaching material. His boyhood trait of maintaining a constant smile as he spoke had not faded, and carried into his singing. He exuded joy while singing whatever punk rock tripe my pen delivered. The Zone was one more joint project he believed in as much as I did. At that time we were the only ones who thought we were onto something important.

Duncan missed our first two rehearsals in my Mom’s garage, which was probably a good thing. That cinderblock box was already packed tight with unharmonious sound waves. The low end of a poorly plucked bass might have made us cut our rock dreams short right then and there. After two rehearsals in the garage we sought a better location.

Seth suggested we rehearse at his house, under fluorescent lighting and a drop ceiling in the finished basement of his Dad’s modest single home in a 1960s development of winding streets and cul-de-sacs in the “Jewish Northeast.” The space around at Seth’s house was more inviting than my neighborhood. We felt comfortable running through our ritual greetings on his front lawn: high fives, fake sucker punches, weightlifting poses, and wrestling holds… We couldn’t do this stuff outside my house for fear of being seen as “pussies.” Although Seth barely spoke in those days, he was a part of his neighborhood. He had friends up and down the block, including our loosely affiliated keyboardist and live bootleg mentor Stuart and a terrifying behemoth of a teenager named Scott, who would go on to become a professional wrestler and, later, a Hollywood stuntman. Like an untrained puppy eager to hump an unsuspecting kid’s leg, Scott got too excited by our wrestling pantomimes, coming across the street to nearly break one of our necks with a Full Nelson or to drop one of us to the ground with an actual body slam. The kid was a menace to us outsiders, but he was gentle with his old buddy Seth.

Seth and his acerbic older brother Doug had been raised by their Dad alone for about as long as Joey and I had been raised by our Mom alone. As freely as I expressed pain over my Dad’s desertion and the epic battles with my Mom, the term “close to the vest” didn’t begin to explain how Seth wore his emotions over his parents’ split. He wore them like a second skin. Despite whatever went on in that house a half dozen years before we met Seth, his Dad had established a serene, loving vibe. Like my Mom, he kept the house immaculate, with a “showroom” living room preserved in plastic slipcovers. Like my Mom he was warm and inviting, offering us soda and snacks before we got down to the business of rehearsing. Unlike my Mom, he reserved judgment, or at least kept it hidden behind the gentle twinkle in his eye and a few puffs on his pipe as he chatted with us in the kitchen.

Big Brother Doug played the role of hard-ass family gatekeeper. He made no attempt at emulating his father’s laid-back style of observation. He’d come down the basement as we were setting up to look down over his glasses and shake his head in disbelief at our juvenile interests. Doug wore his mustache as if he’d had it since 5th grade.

“When are you going to learn to play real music,” he’d smile disapprovingly, punctuating his remark with an “uh, heh-heh.”

This went on for a few weeks of rehearsals. The thing that occurred to us, for all his bluster and superiority, was that Doug didn’t seem that cool. He had a solid mustache, sure, but he didn’t seem to be getting laid and wasted, like the cool kids in school who looked down on us. He wasn’t a jock or a burnout. One day we asked him what constituted this “real music” he spoke of.

“Hold on,” he said contentedly, as if he’d been waiting for just this moment, and he ran up the basement steps. He came down a minute later holding a John Denver album. “When are you going to learn to play music like this,” he asked, holding up an album cover with the broad, smiling face of the artist.

Having the world’s most ineffectual bully come downstairs to heckle us and challenge us to study the John Denver Songbook helped us bond with Seth and built strength, the latter admittedly through the mild resistance of jogging with 6-ounce weights on our ankles.

Friday night rehearsals provided countless opportunities for bonding. Getting the songs worked out was only half the battle. For a group of untrained, unskilled teenage musicians, much cajoling and strong-arming was necessary to get each of us on more or less the same page, more or less the same beat and chord. The sidewalk greeting routines built trust. Doug’s insults built unity. The time spent waiting for Andy to show up for rehearsal built our rhythm section.

We usually scheduled rehearsals for Friday night. Friday night came before Saturday, and Friday night couldn’t come soon enough. Every Friday night, however, Andy was obligated to eat dinner with his family. Obligated. No ifs, ands, or buts. Some Fridays the family ate at home and Andy showed up at rehearsal only 15 minutes later than the rest of us. When the family went out for dinner, however, we may have been forced to wait an hour to get started with our singer.

At first we didn’t know how to practice without Andy singing and setting cues. Appice, Duncan (when he showed), and I were such beginners that we had to look down at the necks of our guitars at all times to know where to fret. Attempting to make eye contact for more than a couple of seconds at a time was daunting. Andy would get right in our faces, if necessary, to remind us that a solo was coming up or that the song was about to end. Trying to sing my own songs while playing guitar at that stage in my development was out of the question. At first we’d sit around and wait out Andy’s arrival.

The more Friday nights we had to wait, the more jokes at Andy’s expense we’d cook up. The more we cut on Andy, the more confident we became that we could make some use of our time as an instrumental combo. Appice might launch into the riff of a song he learned off the radio, something half decent, like the Rolling Stones’ “She’s So Cold.” I might introduce the latest “adapted” guitar riffs and chord progressions rattling around in my brain and see if we could play them long enough to find the start of a chorus. Duncan, if he actually made it to rehearsal, would inevitably crack us up by playing the opening licks to a Black Sabbath or Rush song. Seth drove the beat during any one of these excursions, always making us beginners feel like we were getting somewhere as we rode the broad shoulders of his competence.

For the next few months we were a basement band, until we moved operations to Duncan’s parents’ giant converted horse stable of a garage. My little garage, meanwhile, was better suited for my first-ever demo recording, a manic garage rocker called “Uncle Joe,” in tribute to my uncle. I had no idea I could make a multi-track recording until I stumbled on an old 2-track reel-to-reel in a storage cabinet. Among my Dad’s many quickly abandoned hobbies and guises in the 1960s, I learned, was that of an audiophile. My Mom rolled her eyes, “He wanted to be one of those guys who listened to music exclusively on reel-to-reel tape. That was the fad.”

I don’t recall this passing fancy, but in a few days’ time of my discovery I figured out how to thread the tape and get the thing working. As the reel-to-reel heated up it gave off that beautiful warm, dusty tube smell. There was a green, gaseous, glowing power light that looked like something out of a sci-fi movie. The instruction book was in the case and had barely been cracked open. I figured out how to bounce tracks. I could change speeds, which allowed me to solo at lightning rates I still can’t approach as a guitarist. I even figured out how to plug my guitar directly into the recorder and use it as an amplifier, a trick I’d read was behind Keith Richards’ guitar sound on “Street Fighting Man.” The sounds I was generating were beyond belief. Our band was nowhere near compiling such weird and weirdly unified parts. I blurted out some lyrics that barely kept up with the song’s breakneck-pace variation on the “Gloria” rhythm. I have no idea what happened to that recording or the tape deck. It was probably as amateurish a mess as anything we could play as a band, but when I finished bouncing tracks and listened to the playback—over and over—I felt like God.