Used book and record stores appeared on every other block. At the back of Book Trader, a gently organized bookstore in which it was easy to get lost, there were a couple milk crates of used records in a back room. Most of the records contained within were crap, the kind of mildly hip variety show stuff your parents bought on a whim in 1967 and stopped listening to a month later. A thorough flip through the bins, however, might turn up a cheap, used punk record worth taking a shot on. I shelled out $2.50 for Gang of Four’s Entertainment! one night based on the grim, sarcastic album cover comic strip alone. Another night while flipping through the moldy, discarded Tijuana Brass and Al Hirt albums, I stopped abruptly at an album cover showing four skinny Irish kids in high-water pants, or floods. They looked as young as us and only a little more clued in to the punk scene than we were. The album had a $1.99 price tag on it. I only knew the slightest bit about the band through brief mentions in Trouser Press. I jumped on it. These kids gave off an attainable vibe. They might have been a couple of steps ahead of us on the road to Coolsville, but they were miles behind our heroes, the Clash. The Undertones’ self-titled debut would quickly become one of the most electrifying albums I’d ever purchased. Andy, Seth, and I wore out that album, from the slashing rhythm guitar and rumbling drums of “Family Entertainment” to the obsessive riffing of “Teenage Kicks” and “I Know a Girl.” The music fired us up with hope and positive energy as each 2-minute anthem shot off the grooves. There was nothing to suggest classical training, nothing to evoke that knowing “uh, heh-heh” sound. 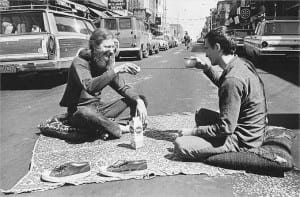 Where all the hippies meet.

Speaking of being clued in (or not) to the punk scene, which was nowhere near as prevalent as will be show in movies and documentaries the further these times fall into the distance, Zipperhead, the punk clothing store that would be immortalized in the Dead Milkmen’s “Punk Rock Girl,” was good for a quick, anxious visit. We never aspired toward the stereotypical Malcolm McLaren SEX boutique fashions that were featured at Zipperhead, but we would have been complete pussies if we didn’t man up and at least pretend to be interested in the shop’s offerings for a couple of minutes.

The Theater of the Living Arts, or TLA, was a historic repertory theater that turned us onto a range of classics, foreign, and cult films. If the stars aligned, South Street runs were capped off with a midnight showing of a rock movie. Each movie added to our rock vocabulary, which we would rehearse as ardently as we rehearsed our music, actually more so, considering the weeks that might pass between actual band rehearsals.

We never missed a screening of the semi-dramatic Clash movie Rude Boy. Along with the mind-blowing live performances that not only delivered all we’d ever need to learn about the power and glory of Forearm Rock, the movie demonstrated the band tremendous sense of color coordination, Joe’s bulging neck veins, and Mick’s pouting lips. We learned what real overdubbed vocals looked and sounded like as Joe and Mick sang alone in the studio to the backing tracks for “All the Young Punks” and “Stay Free,” respectively. That’s how they did it, man! There were memorable lines like, Joe’s “I’m keeping an eye on you” and Mick’s “Get off the fucking stage!” We’d repeat those lines to each other whenever the opportunity arose, both for laughs and to rehearse for the moment when uttering memorable lines would become a necessity. Rude Boy even introduced us to wonderful side characters, like the roadie Jacko. We made note of the need to get ourselves a Jacko, a loyal soldier who could train and police up-and-coming roadies.

The rock movies kept coming. Before we could fully digest the Who documentary The Kids Are Alright, which we’d seen a half dozen times since its release a few months earlier, we gorged on Quadrophenia, an angst-filled Mod drama depicting the Who’s most bombastic rock opera. The Who’s music and the occasional soul records the Mod kids listened to roared from the TLA’s speakers. The characters in Quadrophenia spouted off their own share of great lines, most memorably, “Aye, chuck me a couple a packies,” English slang for condoms, we learned, during the sloppy drugstore heist. Jimmy bones a cute blond “bird” in an alleyway, cumming in about 3 seconds. The movie introduced us to the wonders of speed, which we were still too straightlaced to have actually come in contact with, but which immediately appealed to us because the Who’s music seemed to go so well with a hopped-up Jimmy.

The movie depiction of Jimmy was eye-opening. He was so fucking pissed off—at his parents, at his peers, at himself. He couldn’t fit into any scene—and no wonder: he was a total ass! Nevertheless, I identified with his plight. From that point forward, when I got pissed off at my latest dire teenage situation, Jimmy was my internal gauge. The world needed to know that I was as pissed off and scared and desperate as he was. It was empowering to find my own generation’s pissy little twat and not have to depend on re-enacting the antics of James Dean’s few movie characters. If all that weren’t enough teen power to stew on in one movie, Sting shows up as a character called The Face, the alpha dog among the Mods. Just a year or two before we began to figure out that Sting was not, in fact, cool, he appeared to us as, basically, the Mod Fonzie, riding the coolest scooter on earth.

If the TLA wasn’t showing a rock movie to our liking, which was guaranteed once monthly for the regular midnight screening of The Rocky Horror Picture Show, we’d bend the truth a bit when letting our parents know of our plans for the night and make the longer, hairier trek to the Tower Theater, the 3000-seat concert hall where Seth and I saw the Police play the exact set with the exact stage banter and riffing that we’d heard on a King Biscuit Flower Hour broadcast a few months earlier. Seeing The Last Waltz on that giant screen with that booming sound system was the next best thing to being at Winterland. We’d see some turds there, too, such as Ralph Bakshi’s animated Heavy Metal. Duncan talked us into seeing that one. He was a metal/fantasy guy at heart, stuff that never flew with the rest of us. Another heaping turd most of us were a few years behind seeing was the turgid Led Zeppelin concert film, The Song Remains the Same. The so-called cool kids in my school had been raving over the fantasy scenes. We finally decided to see what all the fuss was about, despite Duncan warning us that it wasn’t Zeppelin at their best. Seeing that movie set me back a few more years in my ability to finally come to grips with the band’s greatness. It was a truly awful rock movie that confirmed my suspicions about the mainstream tastes of my schoolmates.

The strip on South Street circa 1980 was devoid of fast-food chains and other chain stores, which moved during the late-1980s, bringing standard-issue party boys and girls of from all sectors of the city with them. That crowd would be worthwhile fodder for television’s It’s Always Sunny in Philadelphia, but it marked the end of South Street as we knew it.

Cruising South Street with my bandmates was only one part of figuring out how to be an actual band. The other part of the equation was getting together to rehearse. Initially we tried rehearsing in my Mom’s 1-car garage. Andy, Seth, Appice, and I (Duncan was not much of a factor in rehearsals, as will be covered in further detail) were packed tight. We made quite the racket with the garage door closed and everything bouncing off the concrete floor and cinderblock walls. To make matters harder to manage, we were in a rowhouse, so the music easily traveled into our neighbors’ houses. Referring to the early sounds of the Zone as “music” is an extremely liberal use of the term.