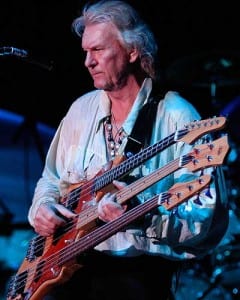 I’m sure you heard the news today that Yes bassist Chris Squire had been diagnosed with a rare form of leukemia that will knock him off the band’s touring circuit for the first time since 1968. This is sad news simply because Squire is a human, and it’s also sad because this oddly, fantastically talented prog legend seems like a good egg – at least as good an egg as any other prog musician with a low profile that seems characteristic of the genre.

With absolutely no research or empirical data, you know what else seems to be characteristic of the prog genre? Band members’ life expectancy and overall health seem to be better than that of other rock subgenres. How many prog musicians died in their prime, or even as early as their mid-50s? How many prog musicians were junkies? Let’s leave Pink Floyd out of this, because they didn’t play enough triplets to really qualify as prog rockers.

Has anyone died in Yes? Did one early member of Genesis die? Did any of King Crimson’s 43 members OD? E, L, or P? A long time ago Soft Machine’s Robert Wyatt got wasted, fell out of a window, and got paralyzed, but he lived for a long time – perhaps, in fact, to this day. Kevin Ayers – was he in Soft Machine? He died not too long ago, right? He was old enough to have died of natural causes or some expected hazard of old age. Daevid Allen of Gong just died, but he was old.

Do you think the rigors of playing progressive rock keep these musicians in better physical condition than other forms of rock? Do rock musicians of any other style live as long and healthy lives?