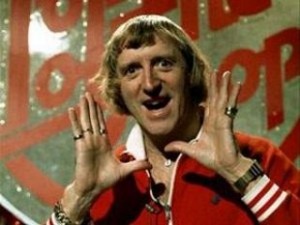 As an American, the death of Sir (yes, good heavens, he was knighted) Jimmy Savile cannot have the resonance with me that it might for many Brits of a certain age. Let’s think of him as a kind of freaky Dick Clark. Well: at least freaky in a different way. Anyway, for a long time, he was to me just “that really weird guy who pops up in a lot of old British invasion clips.” But as the longtime host of Top of the Pops he was undoubtedly a sort of institution in the UK. Perhaps Happiness Stan can put this in some perspective for us.  In the meantime, here is the New York Times obit.