The afternoon I received my Hear/Factor CD was a jubilant one. The envelope had a business address on it, and I routinely (and sometimes randomly) get CDs in the mail from friends, so there was still the suspense of who this one could be from. When I opened it up, there was only a CD inside, a cut out paper listing prog-rock bands like Mahavishnu Orchestra, (put in to up the suspense was my third guess) and a white CD envelope, with the title on the blank CD being “DON’T FEAR THE DIGITS!” scrawled across it – ‘Oh God, a chain letter in CD form!’ were the first thoughts that popped into my head!

It wasn’t until further scrutinizing the CD that I noticed the writing on the back with the actual tracklisting and Hear Factor written on it; I was immediately intrigued. I had no clue who any of these bands were, let alone why there were only 10 tracks appearing on a full CD, 3 of them by different artists, and one a full album (I was guessing).

NEW! Here are two more tracks to see where I’m at: this one and this one!

I popped the CD into my player, with the express intention of letting the first listen hit my buds as a background piece so I could take it in slowly. Was I in for techno, house, some crazy hybrid of industrial and trance maybe? With a Germanic song title like “Fizheuer Zieheuer” guesses were thrown out the window that this wasn’t The Scissor Sisters, and all that I could think of were highschool days of hearing bands like Tack>>Head, Einstürzende Neubauten, 808 State, NIN, The Orb, Ministry and Front 242 blaring out of my little brothers’ bedrooms.

I’m not completely against electronic music, but I do find that a bulk lot of it just tends to leave me cold, although there are exceptions to this rule, and I’m willing to give anything a chance (I hope). The image of “the naked guy” in the sitcom Friends waving flashlights everywhere and having a rave party with himself and Ross popped into my head. I’ll admit it. 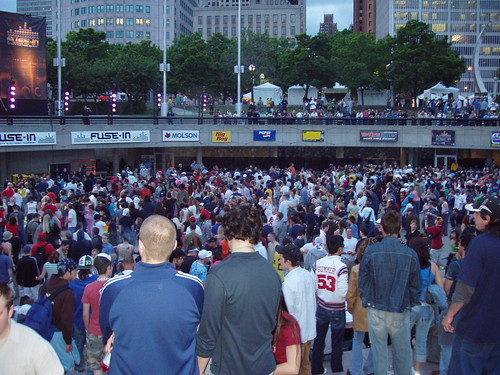 Where are the bands? Hello? Is anyone out there?