Stick with me for a few minutes, OK? I want to tell you about some cool behind-the-scenes workings that sammymaudlin and I experienced a few weeks ago, during a taping of our first appearance on Conan. First, it may be out of our jurisdiction, but I’d like to issue an official RTH SUMMONS for the show’s host, co-host, band members, and crew to join us in the Halls of Rock.

I’ve long suspected that Conan O’Brien would make a fine Townsman. He’s got a self-deprecating sense of humor, for starters, which helps when any one of us decides to duck away from work or family responsibilities for a few minutes to chat about an obscure record label sampler album or the role of the headband in rock. As many of you know, there are times when we find ourselves taking this stuff a little too seriously, at which point it helps to know the joke’s on us.

Conan’s always been comfortable with the musical aspects of his show, from his rapport with his always excellent band (originally the Max Weinberg 7 [?] and now known as Jimmy Vivino and the Basic Cable Band) to his enthusiasm for his musical guests. I remember the night he introduced The Soundtrack of My Life, a band I’d not yet heard, with the anticipation of a teenage boy ready to rock. Thirty seconds into their performance I extended a virtual high-five to Conan to share in his appreciation for the band’s ability to tap into the Power & Glory of Rock. I bought the album the next day. Another time he had one of my heroes, Nick Lowe, on with Conan’s his band backing him up. It was magic. I had tears of joy streaming down my face, and it was all the better knowing Lowe was performing this magic under Conan’s watch and not some soulless asshole like Jay Leno. (Leno strikes me as one of those guys who doesn’t actually hear or perceive the qualities in music. Yeah, I like all kinds of music, he’d say, shrugging his shoulders unconvincingly. As a side thread in whatever discussion ensues, Quick: Name an album Jay Leno may actually own and know!)

In recent years Conan has been more open then ever about his love for rock ‘n roll: buddying up to Jack White; performing with White and others on his NBC show’s farewell; and as I was lucky enough to witness, popping up on stage to sing “My Bonnie” with The Fab Faux, the awesome Beatles cover band featuring Vivino. Whenever I’ve seen Conan onstage playing music it’s a kick. He’s not a “real musician,” but he’s clearly in heaven whenever he gets a chance to play onstage with real musicians. It’s a feeling with which many of us can identify.

I don’t know about Andy Richter‘s tastes in music, although I’ve read his is rumored to have appeared in the film Tommy. Regardless, he makes me laugh my ass off. If he’s got any rock nerd chops I could see him working under alexmagic‘s wing. It’s easy to register, Andy.

The story behind our appearance on Conan (indisputable proof can be seen here) still amazes me. My wife, boys, and I were a couple of days away from our grand West Coast tour. We were at the kitchen table running through the itinerary. “We should have looked into getting tickets for a taping of Conan,” I said.

Quinn is a dear friend we met in our neighborhood who moved back to her home state a few years ago. My wife texted Quinn. Within 10 minutes Quinn contacted a friend who was a friend of one of Conan’s band members. Next thing I know Conan’s band member e-mailed me to assure me that he would get us tickets. Connections are half the battle kids. Connections and really nice people willing to do a favor for a friend of a friend of a friend! I hope Basic Cable Band keyboardist Scott Healy doesn’t mind me singling him out as the Especially Good Egg a the end of a string of good eggs in this tale. Thank you, Scott, Ruby, Jen (I believe), and Quinn!

The show tapes in the late afternoon. We had to arrive at the studio lot about an hour and a half before start time to get checked in, seated, and warmed up. The gathering area in a roped-off section of possibly the cleanest parking garage on earth was surprisingly comfortable. A PA system pumped out good tunes. We were then walked across the lot to the studio and seated. After a few minutes cool music began playing in the studio while we waited for things to get underway:

This was rock-solid stuff to pump over the studio’s sound system while we waited for a fireman to tell us something about the emergency exits and then stand-up comic Jimmy Pardo to warm up the crowd with a very funny set, including insulting interactions with the audience. If Pardo’s got any rock-nerd chops I could see him joining forces with a Townsman like mockcarr.

Next the Basic Cable Band came out to play a short, spirited set, highlighted by Curtis Mayfield‘s “Move on Up.” It was cool to hear the band play complete songs during the commercial breaks. (Once things get underway the show is shot in real time.) It was cool to be able to focus on the stage moves and interplay between band members. It was cool to see Conan playing tabletop drums with his pencil during the band’s commercial break performances. You could tell the host was as receptive to music as we are.

Conan’s first guest of the night was Jeff Daniels. That’s me you can hear unleashing the first Whoo! at mention of his work in The Squid and the Whale, 37 seconds into the above clip. It turns out Daniels writes and performs songs for fun; he referenced William Shatner in setting up discussion of this side of his interests, then he played one of his songs, one musical amateur (in the full French sense of the word) to another.

While the crew set up for a performance by musical guest The Fray, a pumped-in performance by James Brown that led to a side discussion between me and sammy. The Fray was the only bum note of our experience. They went down like a serving of leftover store-brand Coldplay, complete with a layer of congealed grease. The lead singer/piano player looked like Gollum and played from that weird side-saddle position on a drum throne that I believe Tori Amos introduced. At least the singer was interesting enough to criticize. The other guys were wet dish rags. The lights were turned down low at Conan’s desk, so I couldn’t tell if he was drumming along to their performance. As the warm and gracious host he was the rest of the show I’m sure he found something good in their performance, maybe complimenting the drummer on how well his kick drum cut when he shook their hands and signed off for the night. He’s a good egg, that Conan.

When the show ended Conan thanked the audience and waved goodbye. As the crew began milling about, putting things away, Quinn said, “Come on, you’ve got to thank Scott!” She marched down the aisle, waved us down to follow, and assured security that we belonged. Scott spent a few minutes talking to us about gigging beyond the show, the importance of live music, etc. A warm vibe ran from the staff in the parking lot through all the folks involved in the studio production. Sammy and I felt right at home. 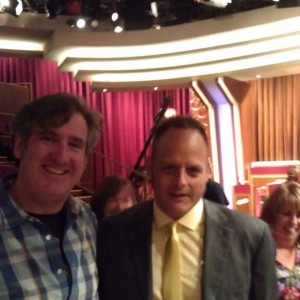 12 Responses to “I SUMMON CONAN O’BRIEN TO ENTER THE HALLS OF ROCK, or Our First Appearance on Conan”