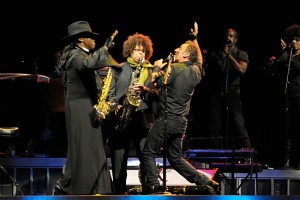 You’ve probably heard this already but Bruce Springsteen is bringing Clarence Clemons‘ nephew, Jake “Little Man” Clemons, on the road to cover some of The Big Man’s sax parts. I had no idea this guy existed until today, but just last week, during the Super Bowl, chickenfrank, sethro, and I were saying it would be good if Clarence had a son or small-in-stature kid he rescued from the streets who could replace him in the E Street Band. The Legacy is served.

One Response to “Introducing…The Little Man!”