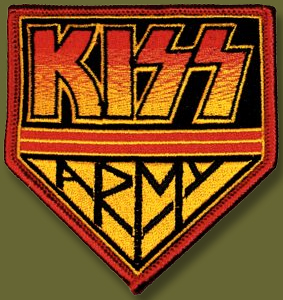 I have personal reasons for organizing Rock Town Hall’s First Annual KISS Army Reunion. Some moderators may be hesitant to share, but that’s not my style. In sharing, however, it is likely that old wounds will be reopened. Whether scabbed or scarred over, these wounds have not healed. We’ve got to treat the infection, treat the cause of our collective cultural suffering, and then perhaps, we will restore the brotherhood in rock that was our generation’s birthright.

In 1978, KISS released the double-album greatest hits collection, Double Platinum. I was 15 years old, deep in the process of a rock ‘n roll reawakening that had been put on hold sometime around the age of 8, when I first became immersed in sports. My brother was 10, wrapping up his stint in Cub Scouts and finding his way in a family that had focused too much attention on Big Brother.

The Last Waltz and The Kids Are Alright were being shown at midnight screenings. I bought my first few punk albums. The Clash’s Rude Boy, Quadrophenia, and a host of other midnight movies were right around the corner! It was becoming clear that professional athletics was not a career option, so I bought a guitar and, with a friend, began formulating an attack on the status quo.

My brother wanted Double Platinum on cassette for Christmas, and to my dismay, his wish was granted.

My brother loved his new double album – on cassette. He was 10 years old, and this was his album. He loved everything about KISS: the makeup, the fire, Gene’s tongue, the naughty lyrics, the superhero characters. He played it for me endlessly, excitedly. He knew nerdy details about the songs and the band members – the kind of stuff I knew about all the good music I loved. It’s clear now that he was trying to impress me the way I’d been attempting to “impress” him, by jamming facts and “check-out-this-part!” insights down his throat.

For a brief time I was patient enough to enjoy these interactions for what they were, but then some song like “Strutter”, “Deuce”, “Cold Gin”, or “Black Diamond” would come on, and I’d have to lay into him like some fundamentalist minister of a father (think Tom Skerrit in A River Runs Through It).

Me: Do you really like this stuff?
Him: Yeah.
Me: Why?
Him: I don’t know. I don’t think about those things.
Me: Do you realize that liking this may lead to liking worse music? Listen to how dumb this stuff is!

This is painful stuff for me to rehash. I’m sure you can imagine how thankful I am for having outgrown this behavior, this style of discussing rock ‘n roll. Back then, it was vital that we didn’t end up “like them,” like our neighbors. We – no – I – was conditioned to think that “we” were “better than them.” As a result, I felt that I should never “settle” for anything. This view of the world served me well as a budding rock nerd. Maybe some of you had similar experiences. Maybe some of you were more like my brother and, frankly, didn’t give a damn.

In time, I found myself up against the KISS Army. My brother listened to the come-ons of KISS Army recruiters, although he never enlisted. He bought a KISS Army jacket. The shame that purchase brought to my world, but looking back on things, how could a 10-year-old boy not dig an actual KISS Army jacket? I was powerless in the face of the KISS Army. I got so desparate I even tried to encourage his interest in Led Zeppelin, a band I also disliked at the time and felt was morally bankrupt yet which I knew was musically more accomplished and interesting.

Was it a year or two later that the KISS solo albums were released? By this time my brother had acquired a good deal of the band’s back catalog, and he would buy the solo albums as well, even the Peter Criss one. I remember him being bummed by the Peter Criss album. I also thought it sucked, and for a brief time we could commiserate on how bad it was relative to the other albums. We also bonded on Ace’s “Back in the New York Groove”, but soon enough I’d feel the need to rub the disappointment of these albums in his face. “I told you so!” was my underlying message of brotherly contempt. 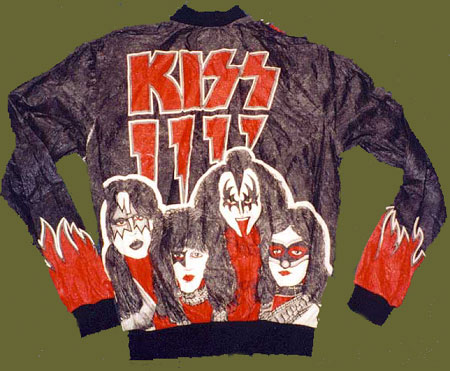 Shortly thereafter, my brother would leave KISS behind. His KISS Army jacket hung in his closet for the rest of his middle school and high school years, but rarely would we broach the painful 2-year rift in our relationship. If it comes up at all today, I take the full brunt of responsibility for the damage it did to our relationship. But let’s not forget that KISS really did suck, and a broad swath of the rock world would steer off course ever since.

I’m hoping that by rehashing these memories with other KISS fans and foes, we will all feel the pain one final time and, eventually, come together as rock fans in ways we have not frequently experienced since Altamont. As you join us, please keep an open mind. Please look within and see where you stood during these crucial cultural moments. Thank you, and thank you to all our contributors.