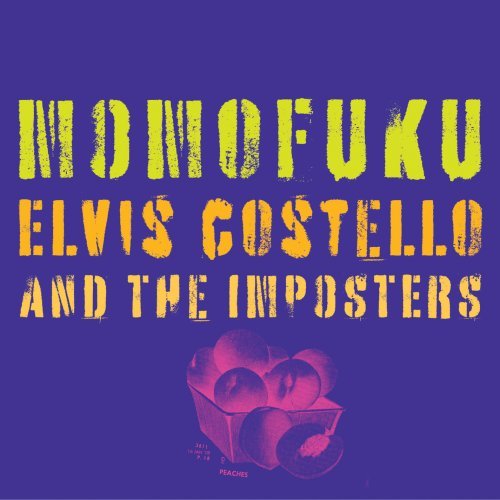 You may recall The Great 48’s initial impressions on Elvis Costello and the Imposters’ recently released, fetishist-marketed, vinyl-only (until May 1, 2008), unnecessarily gatefold-sleeve-packaged album Momofuku. The vinyl/gatefold fetishist in me was intrigued. Although it’s very rare that I even get a chill listening to a new release by one of my favorite artists of all time, no matter how many lousy and mediocre albums he’s released since first parting ways with The Attractions, and bassist Bruce Thomas in particular, I’m still willing to listen to most of his new releases. The packaging of this one had me as stoked as I’ve been since the release of anything by Costello since his collaboration with Burt Bacharach, Painted from Memory (which, by the way, includes the last chill-inducing song I’ve heard by EC, “Toledo”). In fact, I was stoked enough to run out and by the record.

Like The Great 48 said, the vinyl is heavy – at least 178 grams – and it being vinyl, a physical medium, can develop character-building pops and scratches soon after it’s been played. You may be able to hear the surface noise on my copy of the album’s kick-off track, “No Hiding Place”. I love it! And the song has a nice drive to it, complete with so many of Elvis’ beloved vocal and melodic mannerisms. My only beef is that the wildcard provided by Bruce Thomas’ bass is not in evidence. Imposter bassist, Davey Faragher, locks into the right launching notes, has the right intentions, but he never really frees his mind or ass and cuts loose. With Steve Nieve tamed down a bit on a song like this, the song could use an unexpected jolt of energy. Costello’s guitar playing is rarely that exciting when heard (his best guitar work is typically those parts you can barely discern on albums like Get Happy!! and Trust). As a result of Faragher’s more conservative approach, drummer extraordinaire Pete Thomas is more prone to stick to basic “engineer’s dream” drum parts, that is, straightforward snare-and-kick patterns without many surprises.

“Pardon Me, Madam, My Name Is Eve”

It’s songs like “Pardon Me, Madam, My Name Is Eve” that make me wish I more frequently cared what it was Elvis was singing about. With the exception of the of Imperial Bedroom and half of the songs on Get Happy!! and Trust, it’s rare that I get a lyrical kick out of all but a song or two on most of the man’s albums. Witty, angry couplets that are fun to sing along with? Certainly! But an entire set of lyrics that I would care to read or think about? Rarely. Nevertheless, the stately formalisms of this song are worth spinning, and I highly appreciate not hearing the too-clever pinging snare that would have spoiled this song on one of those Mitchell Froom-related productions. Elvis seems to have finally moved away from his Tom Waits fixation. Thank god! (And that’s not to say there’s anything wrong with Tom Waits; it just didn’t fit Costello.)

Here’s another song that, 10 to 15 years ago, during the What Would Waits Do era, would have surely had its humble charms overtaken by marimbas, junkyard drums, and a proudly credited chamberlain. Instead Costello and the Imposters play “Drum & Bone” like an early run-through demo. The light, Mellow Mafia backing vocals are just right. Wish I was getting something out of the lyrics, though.

You know what’s the only thing that SUCKS about Momofuku (beside the album title)? The record cover! They’ve taken the time and care to release this thing on 180-gram vinyl, yet the gatefold cover is as flimsy as a manilla envelope. Any utilitarian notion of the gatefold is down the tubes, and I doubt this cover will outlast the May 1st date of the digital release of these tracks. I may have to cut up the crappy graphics of this cover and paste the panels to a real gatefold sleeve from the ’70s, one made of 180-gram cardboard. Other than that, I’m satisfied with my purchase of Momofuku.