Thanks to Townspeople who played along with, in my opinion, the biggest dud of a Mystery Date to date, and thanks to Townsman dbuskirk for the album, which I believe he thought sounded like a trial run for Boston. But as someone pointed out, Flower Travellin’ Band‘s “Slowly But Surely” at least unintentionally delivered David St. Hubbins-worthy chuckles. This song was from 1973’s double-live set, Make Up. Don’t worry, as with all Revealed posts we’ll leave you with at least one more track.

The band, first known as Flowers, was founded in the late-’60s by Yuya Uchida, who by this time had become friends with John Lennon after touring with The Beatles in 1966. Inspired by the likes of Cream, Jimi Hendrix, and Jefferson Airplane, the band’s first album was, in fact, nothing but covers of their newfound-favorite psych-blues-rock bands. The album cover, as I learned while composing this piece, would have qualified for an old Last Man Standing/giveaway competition. 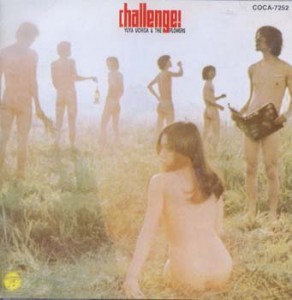 The Make Up tour, you will be interested to know, what recorded on a tour that, originally, was supposed to have featured the band opening for The Rolling Stones. The Stones had to cancel, however, because Mick Jagger was facing a drug bust. Lucky Mick! There are some other odd facts to be found about the band, including mid-’70s work with Frank Zappa, one guy doing a 1980 album with The Wailers, a 2007 reunion and 2008 reunion album, and a planned 2010 tour, which was canceled when one of the members died.

I know you want to hear more from this album. Why not a long track that showcases all the band’s musical strengths and emotional range?