I’ve made my share of Charlie Watts jokes around here, including one running theme that I honestly think I may be right about, but learning just now that Charlie Watts has died at 80 is sad. He gets credit for my core sense of a rock ‘n roll beat: the 4-on-the-floor beat driving “Satisfaction,” the song I feel best lives up to the objectives of rock ‘n roll.

Charlie gets credit for contributing to possibly the smoothest, snakiest groove in rock ‘n roll, on “Under My Thumb.” As with so many legendary Stones grooves, it’s a team effort. There’s no showy performance in his repertoire that dominates a particular Stones song. In fact, I’m not even sure there’s a legendary fill to cite, since Jimmy Miller plays those excellent fills at the end of the choruses on “You Can’t Always Get What You Want.”

The beat that I think most typifies the greatness of Charlie Watts – and a beat that even I wouldn’t suspect was played by some other drummer in my most trolling moments – is “Beast of Burden.” It is the beat that appears when you look up “in the pocket” in the dictionary. It’s another team effort, as everyone is locked in. Charlie must have had a lot to do with keeping that lot locked in.

In second grade, I discovered 12 X 5 in the attic of a friend’s house during a not-so-interesting sleepover. While my buddy and his parents slept (they were heavy drinkers and always passed out early), I wandered around their museum-like house. Anyone’s good stuff was always in the basements and attics. Unfortunately, the basement was off limits because about a fourth of it was flooded, so I headed for the attic. It was teeming with hippie stuff that his older sisters left behind when they moved out: black-light posters, games like “Kerplunk” and “Shenanigans,” ripped up copies of Creem magazine, and best of all, LOTS of records, the highlight being one with a cover featuring the band members’ faces semi-buried in dark lighting. They looked like well-dressed thugs. Printed in the corner of the cover was the word “London.” Man, this was a real find. This thing came all the way from London! Somehow or another, I managed to get it out of the house and home to my white and orange General Electric record player. One spin, and that’s all it took. Each and every visit to the turntable delivered like a roller-coaster ride. From that day on, it was Rolling Stones 24/7, including dreams, night after night, in which I hung out with them, knowing they were probably up to a lot of stuff that was really, really bad, but disregarding all that because just being in their company was such a thrill. Simply put, they were sooooooo cool!

Mick Jagger helps his old pal Don Henley sing a Tift Merritt song “Bramble Roaw” on his new Cass County album out this week. My first Stones record was Some Girls, and before I knew any of the backstory of the Stones and their dalliance with Gram Parsons, I was surprised by the stone country sound of “Far Away Eyes.” Now I always got the joke, but damn, I always enjoyed the song, and I’m sure it was one of the reasons I became more open to listening to my mom’s Johnny Cash records, and later fell into the rathole of alt-country for about 10 years. (Aside — a guy who worked at country station in Belle Fouche, SD, told me he almost got fired for playing “Eyes” in the early ’80s — he spun it once and only once.)

My question is — what songs would you put on a Stones, Jagger, Keef country compilation? Are there any country-tinged songs on solo records that are not well known for this compilation? In addition, I’ll offer up Mick’s “Evening Gown” above. Thanks for your ideas! 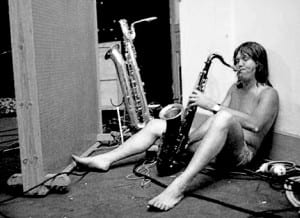 Bobby Keys, best known for his sax work on The Rolling Stones’ Exile on Main Street and Stones concert tours of that era, has died at 70 of cirrhosis. My favorite Keys memories involve countless rants from my close personal friend and founding Townsman E. Pluribus Gergely. Somewhere in the archives there’s probably an entire thread built around one of EPG’s Keys rants, but a taste of his thoughts on the man are available in this old thread. Track 5, specifically, cites Keys’ work. What’s your favorite Bobby Keys moment?

While flipping the radio dial between sport-talk radio ads on my ride home from work last week I landed on the opening measures of one of the most perfect (and perfect-sounding) songs in my world: “Beast of Burden,” by The Rolling Stones. The coming updates on the Eagles’ (my hometown football team, not the band) bye week, following the commercial break, could wait. I had to listen to this soulful gem all the way through!

At the song’s conclusion, the DJ came on and said, “That was some early Stones: ‘Beast of Burden,’ off 1978’s Some Girls album!”

First, I felt like the DJ was an idiot. Then, I felt like I was 100 years old. Finally, considering the Stones have survived 36 years since that album, it could technically be  considered a song from their “early” period.

I know the Stones are old, but jeez… 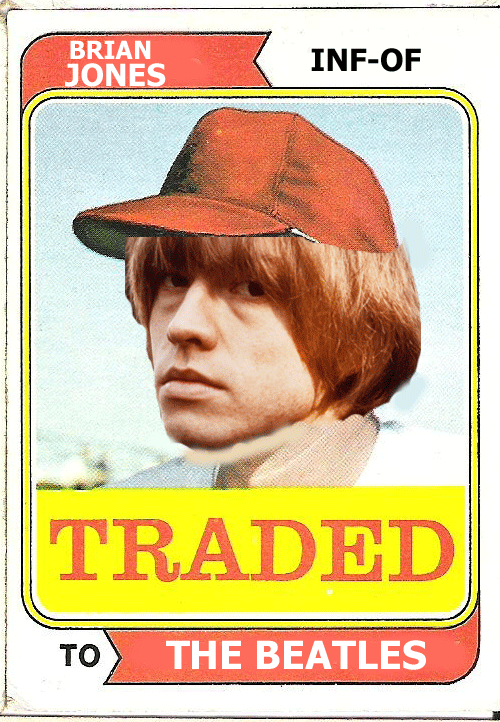 Let’s play Rock ‘n Roll General Managers, shall we? You are the GM of The Beatles or The Rolling Stones. Your mission is to put together a trade with your respected and beloved rival band that benefits both bands. It can be a one-for-one trade or a multi-musician deal. The bands can even trade trademark songs. As Rock ‘n Roll Fantasy League Commissioner, I may even approve a 3-band deal, involving personnel from one of the other big British Invasion bands. My role in these decisions, of course, will be guided by the Best Interests of the Game.

Although longtime friendly rivals, The Beatles and The Stones do not have a long record of musician transactions. The lads from Liverpool did help launch the career of the the scruffy London upstarts by dealing them “I Wanna Be Your Man” to for future considerations. John Lennon and Keith Richard barnstormed in The Dirty Mac. Brian Jones took batting practice with The Beatles’ on a silly B-side. Art dealer Robert Fraser shows up in the biographies of both bands. I believe a young American photographer named Linda Eastman was scouted by The Stones before landing in Paul McCartney’s pad. Billy Preston is probably the one musician closely identified with both bands. Therefore, Preston is NOT eligible for any trade between these bands. Regarding another man closely identified with both bands, The Stones have already declared “No trade-backs!” on Allen Klein.

Stones’ GMs may trade from their band’s full array of “other” guitarists along with dedicated sidemen, like Ian Stewart and Bobby Keys. Stones’ wives and longtime lovers are not untouchable. Even outright hangers-on, such as drug dealer “Spanish Tony” Sanchez, are in play. Likewise, Beatles’ GMs may select from their deep roster of engineers, sidemen, wives, hangers-on, and hagiographers.