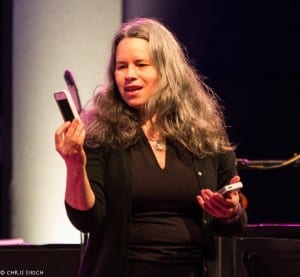 Merchant did lose patience with cellphones, however, as she confiscated multiple phones (even getting help from Dye) between “Texas” and Ophelia’s “Kind & Generous,” an apt ending for Big Day Out. Asking why it could not still be 1998, when people did not feel the need to be on phones and take pictures all the time, she took a stance rarely taken by performers at a show. And the crowd seemed to be fine with it, as they were joyously partaking in the familiarity of an old tune.

That’s right, Natalie Merchant actually confiscated phones – and had venerated WXPN DJ David Dye help her. She doesn’t have better things to do onstage, like sing and perform? I’m cool with artists having their say about people’s inability to “be in the moment,” but leave it at that. It’s 2014. Revive the Latin Casino or Palumbo’s (two long-closed Philadelphia-area “supper clubs” from the pre-rock age) if it’s that hard to perform in the modern age. She annoyed me when she was relevant. She should be grateful that anyone cares to tweet a photo from the show, or whatever nonsense is important to people these days.

18 Responses to “Natalie Merchant Can Kiss My Ass”